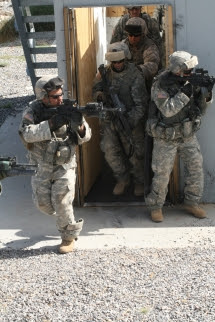 "This is the first time we've had all the different elements from the Bradleys to the tanks, and all combined arms," said 2nd Lt. Randy Pace, platoon leader, 2nd CAB.

Thunderous blasts echoing from the surrounding mountains were heard as artillery firepower emerged from the MIA2 SEP V2 Abrams tanks in response to simulated enemy engagements. Two ranges away, Bradley tank fighting vehicles rolled in and came to an abrupt stop where infantry platoons dismounted and searched for high value targets. Observers stood on top of the catwalk of the modular armored tactical combat house viewing every movement Soldiers performed as they entered the structure that replicates a building with floor plans similar to those in Iraq and Afghanistan.

Throughout the exercise, Soldiers honed their skills in detecting, identifying and locating targets. Training the basics and mastering the fundamentals prepares Soldiers to accomplish the required missions, said Staff Sgt. Ryan Buettner, gunner, D Co., 2nd CAB. He knows deployment is highly probable, with this in mind, everyone must take training seriously and use it to prepare to the fullest.

"We use ranges to train, but also, we qualify on these ranges," said Buettner, "As tankers we get scores. It's a big pride thing to do the best you can."

"We work for TRADOC, the FCS program belongs to him," said Davenport. "He's seeing if we're meeting the standards he expects of us."

At the conclusion of the exercise, Wallace addressed the Soldiers from 2nd CAB and handed out coins to those who were identified as key contributors to the success of the exercise.

"It was good to see [the Soldiers] get some recognition, especially from the TRADOC commander," said Pace.

Once 5-1 becomes proficient in their first-tier skills, they will move into training on the new digital equipment and add FCS technology, as they continue to build and train the Heavy Brigade Combat Team, said Davenport.

"The digital training [that] will begin in October will teach the Soldiers to leverage the future technologies with the current equipment," said Davenport.
at 10/01/2007 07:30:00 AM