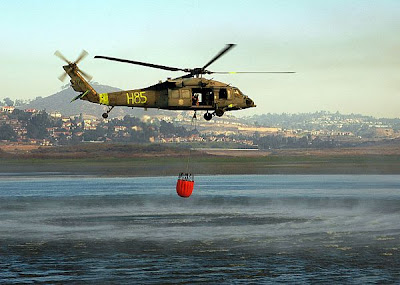 An MH-60S Seahawk assigned to Helicopter Sea Combat Squadron (HSC) 85, lifts a full 420-gallon extinguishing trough from a local reservoir near the raging wildfires in San Diego County. The trough is used to dump water to help fend off the fires that have already forced more than 250,000 people from their homes. (U.S. Navy photo by Mass Communication Specialist 2nd Class Chris Fahey)

Military personnel and assets are helping out in the most serious outbreak of wildfires in California in years.

California National Guard and California-based active-duty personnel are providing some of the muscle needed to contain the fires, which have driven more than 300,000 people from their homes in 12 counties.

Officials at the National Interagency Fire Center in Boise, Idaho, are working with representatives from U.S. Northern Command to coordinate requests for DoD personnel and assets. Northern Command also has personnel working in Southern California directly with local authorities.

With 11 fires burning out of control from Los Angeles to the Mexican border, some DoD installations are themselves in danger from the wildfires. Camp Pendleton, the San Diego Marine Recruit Depot and Marine Corps Air Station Miramar are among the installations asking only essential personnel to come in to work.

Another 550 Marines from Camp Pendleton have volunteered to help local authorities fight the fires in San Diego County.

California authorities have requested and the DoD has sent significant firefighting assets to the area. Helicopters are the most effective airborne asset, as the Santa Ana winds -- which are driving the fire -- make flying fixed-wing aircraft dangerous. California Guardsmen are flying a CH-47 and five UH-60 helicopters in the effort.

Navy pilots are flying two MH-60 aircraft in support of local firefighting efforts. The Marine Corps have a CH-46 and three CH-53 helicopters on standby at Marine Corps Air Station Miramar, and one additional helicopter on standby at Camp Pendleton. All of the choppers can drop water using buckets.

On the ground, the Marine Corps and Navy have deployed six fire trucks each to support local fire fighting efforts. The Navy has also provided a brush truck. All these moves are under mutual aid agreements signed with local authorities.

San Diego has a significantly large Navy population, and an Aegis cruiser, a guided-missile destroyer and two fast frigates will remain in port to support evacuation and movement of family members if necessary.

Officials also have set up the Naval Base San Diego gymnasium as an evacuation center, with room for about 500 people. Sailors also are setting up a 500-person tent city at Naval Amphibious Base Coronado, and space for 442 persons is being prepared at Naval Air Station El Centro.

Commanders have issued orders that all sailors ashore in barracks will move aboard ships to provide room for evacuees. The Navy also also providing 500 cots for a shelter at Qualcomm Stadium, home of the National Football League's San Diego Chargers.

The Federal Emergency Management Agency has asked the Defense Department to identify a military installation in Southern California to be the forward staging area for supplies flowing south from the FEMA logistics center at Moffitt Field, Calif.

The California National Guard is doing heavy lifting in the effort. The 40th Special Troops Battalion, 40th Brigade Support Battalion and a military police battalion headquarters are providing command and control and logistics support at the Qualcomm Stadium shelter. 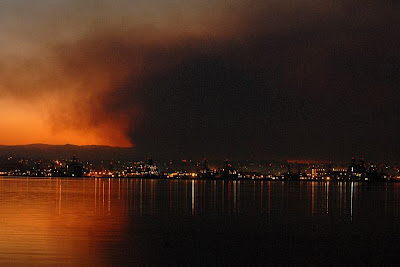 As the sun begins to rise over Naval Base San Diego, the smoke from the fires hangs overhead. Currently, the numerous fires in San Diego County threaten no Navy facilities. However, Navy Region Southwest has established several Military Evacuation Centers for Navy families (and their pets) who have been forced to evacuate their homes. (U.S. Navy photo by CDR Jane Campbell)
at 10/24/2007 07:44:00 AM