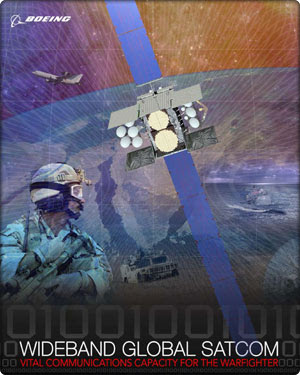 9/30/2007 - SCHRIEVER AIR FORCE BASE, Colo. -- Five Airmen with the 3rd Space Operations Squadron here were the first to finish training recently for the Wideband Global SATCOM system, which is scheduled to launch Oct. 9.

Wideband Global SATCOM, or WGS, is the successor to the Defense Satellite Communications System and will offer 12 times the currently available bandwidth per satellite.

Airmen with 50th OSS began developing products for WGS in 2004. The training is based on 50th OSS' task-based training and evaluation system, or TBT&E, which identifies operational tasks that require proficiency, trains Airmen on these tasks and evaluates their performance once they've been trained.

Capts. Rod Lambert and Danny Matous of 50th OSS instructed the first course. Airmen spent approximately two months training on the new system. The classes covered WGS subsystems such as electrical power, attitude control and propulsion, as well as operational tasks needed to command the vehicle from the operations floor, Captain Lambert said. The WGS training will be offered four or five times per year.

"It's gone through a lot of changes since its inception," he said. "The system was brand-new when I first went through it. The way they go about training is completely different now."

The WGS satellites will be easier to command because both the satellites and the ground control system are smarter than their DSCS predecessors, Sergeant Brady said.

"WGS is a much more advanced system than DSCS," he explained. "It can identify a problem and route around it automatically -- it doesn't always need operators to tell it how to fix itself. Plus, the method of commanding is different. We have task-based commands now: instead of having to type in commands manually, the commands are predefined."

"It makes operations safer because it takes out much of the possibility for human error," Sergeant Brady said. "With DSCS, we have to have two people verify each command, but with WGS, the commands are already verified. We already know they're going to work."

Tech. Sgts. Teoifolis Williams and Shannon Stromberg and Staff Sgts. Rande Johnson and Lamar Boyd were other students in the class. They were selected because their expertise would help 50th OSS further develop the training for the next class.

"The students of the first class were experts themselves," Captain Lambert said.

Sergeant Brady explained that instaructors were open to suggestions in order to improve training.

Captain Lambert said his favorite part of the class is the classroom instruction and training on simulators. He plans to fly down to watch WGS launch from Cape Canaveral, Fla., but he will be back in his instructor role when the next class begins Oct. 15.

Each WGS can route 2.1 to 3.6 Gbps of data -- providing more than 10 times the communications capacity of the predecessor DSCS III satellite. Using reconfigurable antennas and a digital channelizer, WGS also offers added flexibility to tailor coverage areas and to connect X-band and Ka-band users anywhere within the satellite field of view. The system provides tremendous operational flexibility and delivers the needed capacity, coverage, connectivity and control in support of demanding operational scenarios.

The WGS space segment will initially consist of three geostationary satellites operating over Pacific, Indian and Atlantic regions. Under a Block II contract, a fourth and fifth satellite are being procured to meet the warfighter's evolving SATCOM bandwidth requirements. The Block II satellites will be similar to the three Block I satellites already in production and will add a radio frequency bypass capability designed to support airborne intelligence, surveillance and reconnaissance platforms requiring ultra-high bandwidth and data rates demanded by unmanned aerial vehicles.

The first Wideband Global SATCOM satellite is scheduled for launch in Mid 2007 aboard an Atlas V Launch Vehicle. WGS will provide transformational capabilities supporting government objectives for the Transformational Communications Architecture in the next decade and beyond.

With an initial launch scheduled in 2007, WGS will provide transformational capabilities supporting government objectives for the Transformational Communications Architecture in the next decade and beyond.

Capacity:
WGS supports communications links within the Government's allocated 500 MHz of X-band and 1 GHz of Ka-band spectrum. The WGS payload can filter and route 4.875 GHz of instantaneous bandwidth. Depending on the mix of ground terminals, data rates and modulation schemes employed, each satellite can support data transmission rates ranging from 2.1 Gbps to more than 3.6 Gbps. By comparison, a DSCS III satellite will support up to 0.25 Gbps.

Coverage:
The WGS design includes 19 independent coverage areas that can be positioned throughout the field of view of each satellite. This includes eight steerable and shapeable X-band beams formed by separate transmit and receive phased arrays; 10 Ka-band beams served by independently steerable, diplexed antennas, including three with selectable RF polarization; and transmit/receive X-band Earth coverage beams.

Connectivity:
The enhanced connectivity capabilities of WGS enable any user to communicate with any other user with very efficient use of satellite bandwidth. A digital channelizer divides the uplink bandwidth into nearly 1,900 independently routable 2.6 MHz subchannels, providing connectivity from any uplink coverage area to any downlink coverage area (including the ability to cross-band between X and Ka frequencies). In addition, the channelizer supports multicast and broadcast services and provides an effective and flexible uplink spectrum monitoring capability to support network control.

The figure below shows how the X-band and Ka-band antenna suites are interconnected via the digital channelizer to provide the unique flexibility and connectivity of WGS.

Command and Control: Control of the WGS communications payloads is accomplished from four Army Wideband Satellite Operations Centers (WSOCs), using ground equipment hardware and software developed by Boeing, ITT Industries, and Raytheon Corp. Each Global Satellite Configuration and Control Element (GSCCE) has the capability to control up to three satellites at a time, via "in-band" (X-band or Ka-band) telemetry and command links. Spacecraft platform control is accomplished by the 3rd Space Operations Squadron (3 SOPS) at Schriever AFB in Colorado Springs, using WGS mission unique software and databases provided by Boeing, hosted on the Command and Control Segment Consolidated (CCS-C) systems that are being fielded by Integral Systems, Inc. The satellite is designed for compatibility with the current S-band SGLS TT&C capability, as well as the planned Unified S-band (USB) formats and frequencies.

XIPS is 10 times more efficient than conventional bipropellant systems. Four 25-cm thrusters remove orbit eccentricity during transfer orbit operations and are used for orbit maintenance and to perform station change maneuvers as required throughout the mission life. Deployable radiators with flexible heat pipes provide substantially more radiator area, resulting in a cooler, more stable thermal environment for both bus and payload. This increases component reliability and reduces performance variations over life.
at 10/06/2007 08:00:00 AM