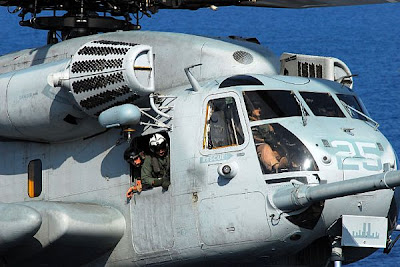 DLQ’s are conducted to allow both pilots and the shipboard flight deck crews to earn certifications necessary for deployment. This is the second round of qualifications for pilots assigned to the strike group, the first conducted during the NASSG’s Tactical Commander’s Amphibious Training underway period last August.

“Doing this type of training is extremely important to the readiness strike group,” explained Cmdr. Jeff Jatczak, officer in charge of Tactical Air Control Squadron 21 Det. 2, who oversees all flight operations for the strike group. “Once we deploy, we need to be able to get the aircraft out to the ships, and they’ve got to be able to operate off of them, in many different environments, both day and night. This is very important to our expeditionary and stealth capabilities for going ashore.”

While the requirement may be a routine for strike groups as they prepare for deployment, the experience was a first for some of the pilots involved.

“This is the first time, other than initial flight training that we have landed on a Navy ship,” said Marine Corps Capt. Buck Sessoms, the ACE’s senior ‘Huey’ pilot and Weapons Tactics Instructor (WTI) for the ACE’s Marine Medium Helicopter Squadron 365. “During initial flight training in Pensacola, we landed on a ship during controlled, daytime conditions, but it was very benign. Here, we are expected to be qualified during daytime and nighttime conditions and it’s quite a bit different.”

“They are coming out here to a totally different environment,” explained Jatczak. “Different things happen in terms of winds, sea states, deck movement, and the lighting of things all around the ship. All of these things play much differently than from a stationary air field.”

According to Jatczak, pilots go through hours of classroom training at Marine Corps Air Station Cherry Point, N.C., and Camp Lejeune, N.C., to give them a better idea of the procedures and conditions they will face prior to coming to the strike group ships. Pilots will then come to the ships to familiarize themselves with their new environment and then attempt the qualifications under the mentoring eyes of Marine WTI’s and the ship’s Air Department crew members.

During the DLQ’s, pilots conduct what are commonly referred to as ‘touch and go’s’ where an aircraft takes-off from one location, touches down at another for a short period of time and then returns to its original departure point. Pilots will continue this process until instructors feel they are comfortable with the necessary procedures for landing and departing safely. Even after the DLQ’s are earned, pilots undergo further mission essential training to ensure pilots are mission-ready.

While DLQ’s test and certify the abilities of the pilots, it also affords the ship’s Air Department opportunities to familiarize and certify themselves for flight deck operations. Crews must also be tested and certified in the same way the pilots must be certified for deployment. Because personnel transfer on and off ships so often, and with the strike group deploying with a different MEU each time, familiarization and integration between the flight deck crews and the pilots is crucial for success.

“At the same time that the Marines are getting ready for the deployment and getting comfortable with the flight deck, the Air Department is getting ramped up and ready to go,” said Lt. Cmdr. Jeremy Vaughan, assistant air officer aboard USS Nassau (LHA-4). “Only about a third of us were on the last cruise, so this is an opportunity for our Aviation Boatswain’s Mate handlers to get qualified as well. We will have the senior guys out there first, they will land the aircraft and then we’ll bring in the junior guys to get them qualified with the different types of aircraft aboard.”

“It’s been great, obviously [flight deck crews] are going through training just like we are,” said Sessoms. “You’ll see times when they are being corrected by instructors on the deck just like we are being corrected in the aircraft. I think it’s understood that everyone needs training and everyone needs practice for proficiency and that’s exactly what we’re getting.”

ESGINT is the second of three pre-deployment exercises designed to test the fundamental capabilities and shipboard interoperability between the NASSG and the 24 MEU out of Camp Lejeune, N.C.

Currently preparing for its regularly scheduled 2008 deployment, the NASSG is made up of more than 5,000 Sailors and Marines, and projects sea power ashore by maintaining the capability of landing amphibious forces by helicopters, amphibious track vehicles, air cushion landing craft, and assault craft whenever and wherever the need arises. 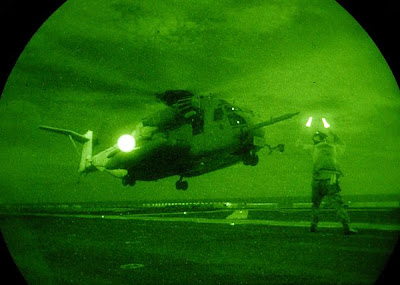