Air Force armada all about the ammo 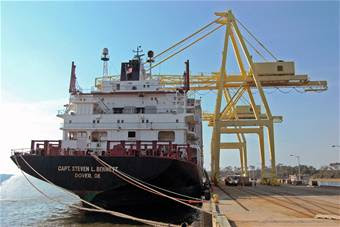 The MV Capt. Steven L. Bennett, one of the Air Force's Afloat Pre-positioned Fleet ships, sits at one of the docks Oct. 16 at the Military Ocean Terminal-Sunny Point, N.C. The APF ships are loaded with thousands of tons of munitions and then sail to a predetermined point in the Pacific or Indian Ocean where they wait to offload their cargo when needed. The Bennett is one of four ships belonging to the APF. (U.S. Air Force photo/Staff Sgt. Matthew Bates)

Not many people know the Air Force has a navy. Ask the typical Airman if he can name even one of the service's ships and he would most likely shrug and say, "Ship? We don't have ships. We fly airplanes."

But the fact is the Air Force does have ships. Called the Afloat Pre-positioned Fleet, the program consists of four freighter-style ships that sail around the world loaded with various types of ammunition.

"These ships carry anything from bombs to missiles to high-caliber rounds and fuzes," said 2nd Lt. Marc Meier, the APF program manager.

The program is based out of the Military Ocean Terminal-Sunny Point, an Army-run port located near Southport. The 16,000-acre site is a key shipping port for military operations and is the only of its kind that can handle such a large distribution of ammunition.

Most of the ammunition arrives at Sunny Point via rail. Boxcars carrying tons of ordnance are offloaded and packaged in large, side-opening containers that are marked with radio frequency bar code scanners. These high-tech gadgets track the containers as they journey across the globe and maintain strict accountability of the weapons systems inside.

Once the containers are loaded and labeled, they are stored in climate-controlled cargo holds on one of the APF's ships, each of which is named for fallen heroes. These are the Capt. Steven L. Bennett, the Maj. Bernard F. Fisher and the Airman 1st Class William H. Pitsenbarger, all three are Medal of Honor awardees. The other ship, the Tech. Sgt. John A. Chapman, is named after an NCO who died supporting Operation Enduring Freedom and an Air Force Cross recipient.

"Once a ship is full, it will sail to a predetermined area, where it will sail until it's called upon to dock or offload its cargo," Lieutenant Meier said.

The ships do this for five years at a time.

"A lot of people ask 'Why ships?'" Lieutenant Meier said. "The answer is that ships can carry more, do it cheaper and free up our cargo planes for other missions."

For instance, during the early days of Operation Enduring Freedom, the Fisher downloaded nearly 400 containers of munitions that were used to sustain bombing sorties over Afghanistan.

"These ships carry a lot of munitions," said Staff Sgt. Juan Guadalupe, an APF team member from Tyndall Air Force Base, Fla. "And when needed, they can offload them pretty fast."

The ships carry a combined total of 42,900 short tons of munitions, with a net explosive weight of 24 million pounds. The munitions recently loaded onto the Bennett alone are worth an estimated $266 million.

But, none of these munitions would make it to the ships without the aid of the Airmen assigned to the pre-positioned fleet. Ammunition experts by trade, these Airmen are brought to Sunny Point from all across the globe for several months.

"It's kind of like a deployment for us," said Airman 1st Class David Lowery, an APF crewmember from Andersen AFB, Guam. "We get here when the ship does and we leave when it does, which is usually three or four months."

While the sheer magnitude of the operation is awe-inspiring to some, for others on the APF team simply working around a ship is the highlight of the tour.

"I never thought I'd be working on a ship in the Air Force," said Senior Airman Joseph Fitchett, an APF team member from Spangdahlem Air Base, Germany. "But it's definitely a new experience."
at 10/19/2007 08:39:00 AM