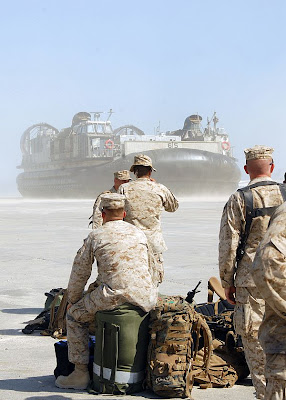 According to Lt. Col. Justice Chambers, 13th MEU SOC operations officer, the BLT and other units attached to the MEU conducted 14 separate named operations focused largely on disrupting the insurgent's freedom of movement and denying the movement of materials into Baghdad and Al Anbar.

The operations resulted in the confiscation and destruction of over 90 tons of homemade explosives and raw materials used to create them.

"We successfully accomplished all missions assigned to us, contributing significantly to the decreasing levels of violence in Kharmah, Fallujah, and Ramadi, and the improving security situation in Baghdad," said Chambers. "BLT 3/1 disrupted the enemy's freedom of movement by operating where coalition forces typically have not operated. That set the conditions to transition portions of our area of operations to the Iraqi army, allowing them to greater control selected portions of eastern Al Anbar."

He added that the contribution of the Iraqi forces almost assured success because of their integration with the Iraqi people.

"When they integrated into our operations we saw the pronounced benefit. Where we could spend a lot of time trying to detect insurgents, they can go in and immediately pick out a person and say he doesn't belong here," said Chambers. "They [the Iraqi army] are served by thoughtful leaders and troops who feel they serve all of the Iraqi people."

Accomplishing these missions would not have happened without the support of the MEU's Combat Logistics Battalion (CLB) 13.

"The first 30 days the Battalion Landing Team was non-stop and they were able to maintain that tempo through the efforts of CLB-13 to build-up and sustain logistics," said Chambers. "CLB-13 certainly made everything the BLT did possible."

The AV-8B Harriers and helicopters of the MEU's Aviation Combat Element began returning to BHR Sept. 14. Helicopters and LCACs (landing craft air cushion) were then used to return nearly 2,000 Marines and their equipment.

"It's a relief to get the hard work done with," said Cpl. Seth Gyldenvand, BLT 3/1, Kilo Co. "I'm looking forward to getting some rest and liberty."

"It's a good thing. We're getting the Marines back and we're going home soon," said Gunnery Sgt. Bernardo Cruz, BHR combat cargo. "The combat cargo Marines and Sailors have been doing a great job getting the MEU back on board. Everyone put in a lot of time getting ready for this, and they showed a lot of teamwork to get all the equipment on board quickly and safely."

As the Marine Ground Combat Element back loaded aboard BHR, the ship mustered a 150-man working party joined by volunteers from the ship's Second Class and First Class Petty Officers Associations to help the Marines bring their gear aboard and provide them with a warm welcome.

"We're out here helping them because we are all on the same team in the same fight," said Storekeeper 2nd Class (SW) Marshall Mallory. "They've been out there for about four months, and they're tired, a lot more tired even than we are. So we're pitching in to give them a hand, grab their gear and get them set up in berthing."

The gesture made a positive impression on the Marines as they stepped off the LCACs and climbed the ramp into the hangar bay.

"It's a great welcome back," said Gyldenvand. "We've been hauling our gear around for the past week and getting some help from our Navy brothers is great."

BHR, Denver and Rushmore are part of the Bonhomme Richard Expeditionary Strike Group (BHRESG). BHRESG has been operating in the U.S. 5th Fleet area of operations conducting Maritime Security Operations (MSO). U.S. and coalition forces conduct MSO to help set the conditions for security and stability in the maritime environment, as well as complement the counterterrorism and security efforts of regional nations. These operations seek to disrupt violent extremists' use of the maritime environment as a venue for attack or to transport personnel, weapons or other materials.
at 10/02/2007 08:10:00 AM