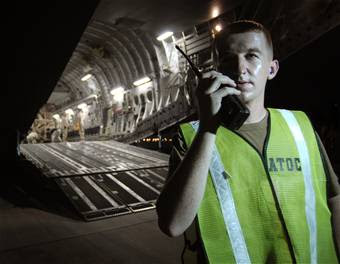 The U.S. Central Command Air Forces director of Mobility visited Airmen assigned to Camp Djibouti recently as part of his first visit of the Southwest Asia area of operations since assuming his position.

"My purpose is to find out what (the) requirements are and how we can help (the Airmen) get their mission done," Brig. Gen. Alfred J. Stewart said.

"If you look at a map and see how geographically separated this AOR is from Afghanistan and Iraq, you'll understand that they are pretty much completely dependent on air for resupply," the general said. "We have C-130 (Hercules aircraft) that bring supplies here to help them get the mission done."

The CENTAF AOR stretches from the Horn of Africa through the Arabian Gulf region, into Central Asia. Those distances make air mobility a vital component to the CENTAF mission -- moving people and cargo where needed, 24 hours a day, seven days a week.

On the day of the general's visit to the Horn of Africa, C-130 and C-17 Globemaster III crews flew approximately 180 airlift sorties, delivering 300 tons of cargo and transporting approximately 5,500 passengers throughout the CENTAF AOR.

"The entire air mobility system is hard at work in (operations Iraqi Freedom and Enduring Freedom)," General Stewart said. "A lot of the time we are invisible, but we make the rest of the fight possible."

"We have tremendous statistics to confirm that when we have injured Marines, Soldiers and Airmen in battle, if we can get them into the hands of the aerial medical evacuation system, they have a 98 percent chance of surviving," the general said. "If we can just get them, within a reasonable amount of time after they were injured, into the aerial medical system they are going to survive. That's a tremendous part of what we do."

The aerial refueling capability provided by the air mobility team allows American and coalition aircraft to stay in the air covering long distances in considerably less time, the general said.

"To carry the fight to the enemy, the KC-135 (Stratotankers) and KC-10 (Extenders) are absolutely essential," he said. "They make it possible for the Combined Forces Air Component commander to provide the air order battle over the battle field almost continuously. Without aerial refueling, it would be a much different fight. It would be much more difficult to do the things we do."

Recapitalizing and modernizing the tanker inventory is the Air Force's No. 1 priority to ensure the joint force can continue to project combat capability anytime, anywhere."

"We are able to move," General Steward said. "We have global reach, global mobility every day and the assets of Air Mobility Command make that global reach possible." 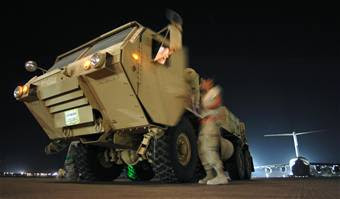