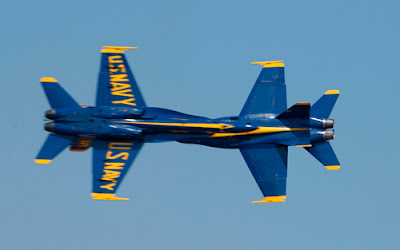 Courtesy of Gayle Van Horn; Dan and the Milcom gang; and Military.com

San Francisco's Supervisor Chris Daly is zero-for-three in his battle to spoil San Francisco's Fleet Week. Daly's latest resolution to ban the U.S. Navy's Blue Angels from performing at Fleet Week was rejected by the city's officials for the third time on Sept. 25, reports the San Jose Mercury News.

Daly's first attempt at stopping the Blues was rejected in August when the city's Government Audit and Oversight Committee tabled his measure in a 2-1 vote.

In his second effort, Daly amended his resolution to ban the Navy jets from flying over heavily populated areas of San Francisco. Daly told the committee that a plane crash would result in a significant loss of life and damage to property. The committee disagreed and subsequently rejected the measure in early September.

Daly's most recent plea restated his safety concerns about the demonstration team and included pictures of the Blue Angels crash in Beaufort, S.C. last summer where one of the team's pilots was killed and eight people on the ground were injured.

Daly asked the committee, "What would happen if this happened over a heavily populated area like San Francisco?"

Nathan Ballard, spokesman for Mayor Gavin Newsom, is among several of the city's officials that support the Blue Angels participation in Fleet Week and told the San Francisco Chronicle, "We think the FAA is better qualified to decide the Blue Angels' flight path than Chris Daly is . Chris Daly is many things, but he's no air traffic controller."

The Beaufort, S.C. incident was the first crash for the Blue Angels in eight years. The team has had 26 fatalities over the last 60 years.

Blue Angels supporters say passage of this measure would be an insult to servicemembers and veterans and another black mark against the Bay Area - a region increasingly viewed by many Americans as woefully naïve in its bias toward liberal causes. For his part, Mayor Newsom and other city council members want to keep Fleet Week (and the Blue Angels) in San Francisco because of the positive economic impact it has on the city and to show support for our nation's servicemembers.

Fleet Week is scheduled for this week of October 4-9.

I normally don't like to editorialize here on the Milcom blog, but on this I can't resist (and it is my blog).

The whole Bay area has turned into a haven for the stuck in the 60s hippies and anti-military crowd and their true colors are showing.

And how did I get there? We have our military returning from combat mistreated at the Oakland International Airport (not once but twice), the Marines not allowed to film their recruitment commercial in the streets of SF, and now this with Fleet Week and the Blues.

It is time for DoD to pull completely out of this cesspool and waste of human skin known as the Bay area. I don't want one single dollar of my taxpayer money being spent by DoD in the Bay area.

Time for no more Fleet Weeks or flights through the Oakland International Airport for our military. I am sure we can find a more accommodating airport for our soldiers to refuel at. Are you folks at DoD listening, no more flights through Oakland. You need to learn from your mistakes.
at 10/05/2007 07:55:00 AM