Spirits set to soar over Pacific 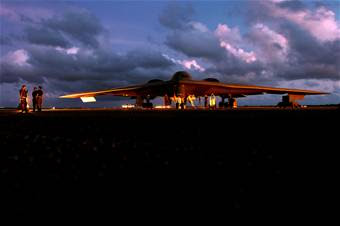 ANDERSEN AIR FORCE BASE, Guam -- B-2 Spirits recently deployed here from Whiteman Air Force Base, Mo., are scheduled to fly their first missions over Guam in mid October as part of a continued bomber presence in the Pacific region.

The B-2s are at Andersen AFB to enhance regional security, demonstrate the nation's commitment to the Western Pacific and focus on integrated training opportunities.

"The B-2s are normally deployed in garrison," said Lt. Col. John Vitacca, the 393rd Expeditionary Bomb Squadron commander. "For us, that means we are prepared to fly from Whiteman at any time to strike targets anywhere in the world in a moment's notice."

While Colonel Vitacca's squadron goes "wheels up" for the first time on this deployment, he said the first large-scale integration is during Exercise Koa Lightning in late October over Hawaii.

The Koa Lightning operations demonstrate the Air Force's unique capability to strike an adversary anywhere on the globe. The B-2s will take off from Guam, refuel with a tanker deployed from the Ohio Air National Guard, engage their targets over the bombing range in Hawaii, and then return to Andersen AFB. These sorties are about 20-hours long.

"This exercise will provide good training for our crews as they drop weapons and integrate with ground forces at the Pohakuloa Training Area," Colonel Vitacca said.

"I'm glad to see the B-2 operation up and running," said Col. Damian McCarthy, the 36th Operations Group commander. "We have a great opportunity to practice joint operations across the board with a truly unique bomber. I'm looking forward to fully integrating the B-2s into the 36th Wing." 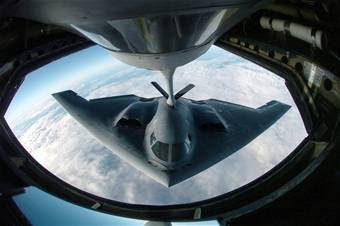 A B-2 Spirit bomber refuels from a KC-135 Stratotanker during a deployment to Andersen Air Force Base, Guam. The bomber deployed as part of a rotation that has provided U.S. Pacific Command officials a continuous bomber presence in the Asia-Pacific region, enhancing regional security and the U.S. commitment to the Western Pacific. The B-2 is from the 509th Bomber Wing at Whiteman AFB, Mo. The KC-135 is assigned to the Illinois Air National Guard's 126th Air Refueling Wing at Scott AFB, Ill. (U.S. Air Force photo/Master Sgt. Val Gempis)
at 10/18/2007 10:01:00 AM