Spectres begin their journey to a new home 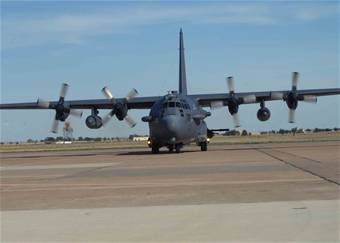 So common, in fact, that often the sight of the aircraft taking off does not draw the attention of most personnel on base. To many, it is just another routine training exercise in progress for one of the busiest squadrons in the Air Force.

True to form, on Tuesday, May 19, a pair of Spectre gunships took off in what may have appeared to be yet another normal training flight.

However, this particular take off meant something truly special to all Hurlburt Field personnel, whether they realized it or not.

On this particular takeoff, members of the 16th Special Operations Squadron, the men and women who fly the Spectre gunship, rolled down Hurlburt Field's runway, marking the beginning of the end of a decorated combat squadron located on Hurlburt Field.

The planes reached the end of the runway, climbed into the sky, then quickly headed due west, becoming the first airplanes from Hurlburt Field headed to the squadron's new home awaiting them at Cannon Air Force Base, N.M.

"It was satisfying to see the big pieces of the move getting prepped and ready for their formation departure," said Lt. Col. Sean Farrell, 16th SOS commander. "It marked another milestone [in the move] as it was one of first tangible things to demonstrate that yes, we are actually moving."

Upon landing at Cannon AFB, the two aircraft and their crew members were greeted with a warm reception. Then, with as much simplicity as they had left Hurlburt Field, the crew members got to work. They knew that the gunship's operational tempo does not allow the aircraft or its crew to sit idle for a long period of time, even during historic moments.

"We have to continue to replace and train our guys," said Farrell. "We have to train them to ensure we continue to have the best gunship crews Air Force Special Operations Command's got."

Cannon AFB, formerly a fighter wing base, was named as a new AFSOC base. The addition of a second base dedicated to special operations missions helps alleviate some of the log jam that currently exists for some aircraft at Hurlburt Field who use the Eglin Range for training, said Farrell.

Moving an entire squadron has the potential to cause some headaches.
Col. Farrell, however, believes that a well-developed plan coupled with expert personnel have helped to lessen the impact and shock that could have risen.

"Our maintenance folks have really come through for us," Farrell said. "They have managed to provide us with planes to do the mission. With their help, we have been able to provide training and combat sorties in three different locations. They have done a great job."

"I'm proud of how we have accomplished the move thus far," Farrell said. "We haven't interrupted schoolhouse operations or operational requirements. In addition, despite the move, we have been able to meet the obligations to the combatant commanders down range, while working with reduced operations here."

The move will help the aircraft train more often, which allows them to continue to improve their tactics and techniques to become an increasingly lethal force, said Farrell.

The expansive Melrose Range, located just outside of Cannon AFB, is a range that provides the operators with realistic practice areas. It has similarities to the Eglin Range already in use by the squadron, which helps eliminate much of the lag time for personnel as they get used to their new surroundings, said Farrell.

"The training opportunities will get better every year," Farrell said. "We plan on taking advantage of that. There are some aspects of training that may in fact eventually be a better fit for the squadron [at Cannon]."

The AC-130H Spectre gunship is a modified Lockheed airplane configured with several side-firing weapons, including a 105 mm Howlitzer and a 40 mm Bofors cannon. The aircraft is used for close air support, armed reconnaissance, interdiction, night search and rescue, and airborne command and control.

There will be several events taking place to highlight the squadron's change of location. On June 18, there will be a barbecue organized by the 16th SOS as an opportunity for the squadron to thank the wing for the memories.

The following day, there will be a flag transfer, when the 16th SOS's guidon will be loaded onto a gunship and flown to Cannon to signify the transfer of location. On that day, the detachment currently operating at Cannon AFB will officially become the 16th SOS, and the remaining individuals who are finishing up the move at Hurlburt Field will operate as a detachment here until all aspects of the move are complete.

Though manpower, equipment and aircraft will still be at Hurlburt Field through the end of October, the transformation of the new location will take another step on July 30, when Farrell relinquishes command of the squadron to the current Squadron Operations Officer, Lt. Col. Jason Miller.

The manner in which the 16th SOS is moving is unique, said Farrell. Usually, a squadron will go on inactive status in order to move their people all at once to a new location.

Due to the operational requirements of the aircraft, however, the 16th SOS was not afforded that luxury, as they have had personnel continuously deployed in support of Operation Enduring Freedom since 2001.

The 16th SOS became operational in October of 1968 at Ubon Royal Thai Air Force Base in Thailand. They moved to Hurlburt Field in December 1975, where they have been ever since.

Despite over 30 years at Hurlburt Field, Farrell does not feel that people should be saddened by the move.

"The 16th SOS is not going away, we will still be the 16th SOS no matter where we go," Farrell said. "I understand for former active duty gunship guys, it's bittersweet because we're leaving, but it's not as sad for guys in our unit, though they will miss their friends and family that they have here. It's beneficial to spread units and capabilities around and not hold them in one spot."
at 6/03/2009 08:06:00 AM