U.S. Kicks Off Participation in FRUKUS 2009 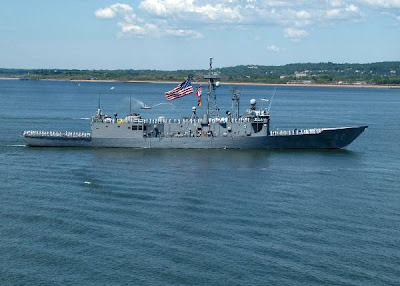 NAPLES, Italy (NNS) -- Maritime forces from four countries began participation in annual exercise "FRUKUS" in the Bay of Biscay off the coast of Brest, France, June 19.

FRUKUS, which stands for the participating countries – France, Russia, the United Kingdom and the United States – is a naval exercise focusing on strengthening maritime partnerships and improving interoperability and overall communication between the nations.

Exercise FRUKUS is broken into two segments, in port and at sea.

In port, Sailors will participate in training for communications and maritime interdiction operations and maritime coordination ashore, while senior leadership will focus on topics including maritime security, fleet modernization and international, submarine rescue.

At sea, the exercise will be driven by a scenario that supports Maritime Domain Awareness (MDA), the interoperability between forces afloat and maritime interdiction [law-enforcement] operations.

"During this exercise, Sailors will get underway and become familiar with the other navies' operating procedures and practices," said Cmdr. Scott Smith, commanding officer of USS Klakring (FFG 42). "When they meet in the future to conduct combined peacekeeping or humanitarian operations, or to counter trafficking in drugs, weapons, or persons in this region, they will be better able to work together."

In the wake of last year's Russia-Georgia crisis, the United States cancelled FRUKUS 2008 participation as a part of its broader suspension of military-to-military activities with the Russian Federation.

FRUKUS was created in 2003 to aid in talks between France, Russia, the United Kingdom, and the United States. Sponsorship rotates between the four navies with the lead nation traditionally providing a blend of professional and cultural activities. The principal aim is to increase interoperability by developing individual and collective maritime proficiencies of participating nations, as well as promoting friendship, mutual understanding and cooperation.