Blog Editor Note: For my readers in the mid-west, the frequencies for Hawg Smoke 2008 at posted at the end of the article below. 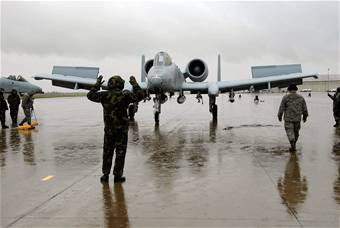 A crew chief from the 442nd Fighter Wing marshals in the first A-10 Thunderbolt II to arrive at Salina Airport; Kan., for the Air Force's Hawgsmoke 2008; a biennial A-10 bombing and tactical gunnery competition. The event, hosted by Airmen from the 442nd FW's 303rd Fighter Squadron, tests A-10 pilots in flight leadership, target acquisition, weapons delivery. The 442nd FW is an Air Force Reserve Command unit based at Whiteman Air Force Base, Mo. (U.S. Air Force photo/Master Sgt. Bill Huntington)

SALINA, Kan. (AFNS) -- Two A-10 Thunderbolt IIs broke through the overcast skies of central Kansas Oct. 15 and crossed over the center point of the Salina Airport's north-south runway officially kicking off Hawgsmoke 2008, the Air Force's biennial A-10 bombing and tactical gunnery competition.

The moment also marked the end of two years of exhaustive preparation for the Airmen in the 442nd Fighter Wing's 303rd Fighter Squadron, the event's host and an Air Force Reserve Command unit from Whiteman Air Force Base, Mo.

The 303rd FS Airmen earned the right to host the contest by winning Hawgsmoke 2006, held at Davis-Monthan AFB, Ariz., that year, which pitted the 303rd's pilots against pilots from 16 other Air National Guard, Air Force and Air Force Reserve A-10 units from around the world.

Hawgsmoke tests A-10 pilots in flight leadership, target acquisition, weapons delivery and support and the amount of preparation and coordination to host the event is daunting.

"There is a lot more that goes into Hawgsmoke than the general public and most of the participants realize," said Maj. Les Bradfield, 442nd Operations Support Flight. "It's much more than just coordinating between an airport and a range."

Since the event is not being held on an Air Force base many of the organic support elements regularly used by A-10 units at a government-owned facility, and sometimes taken for granted, needed to created or cultivated.

Fortunately for the Hawgsmoke-hosting team, they struck gold with the facility at the Salina airport. The facility has a supportive administration and close proximity to the Kansas Air National Guard's Smoky Hill bomb and gunnery range where most of the competition happens. The airport, formerly Schilling AFB, is just a few miles from Smoky Hill and the airfield has a large amount of available open ramp space, which makes it ideal for parking and servicing the visiting A-10s.

"They are not used to this many aircraft coming in and staying for this long," Major Bradfield said. "We've been greasing the wheels, letting them know that we are coming, what rules we operate by and making sure they can facilitate that."

That preparation, airport and Salina community officials, along with great support from sponsors and the community at large have made the event possible.

One late wrinkle in the preparation was the announcement by Air Force officials of a time-compliance technical order, or TCTO, that required immediate inspection and repair of wing cracks approximately 130 A-10s throughout the Air Force. Maintainers in the 442nd FW were required to inspect 11 of the unit's 27 A-10s.

The order caused units to re-evaluate their ability to participate and caused some to cancel. Other wing's with available A-10s, including the 442nd, stepped forward to provide aircraft for those who couldn't use their own jets.

Even though there were enough teams and aircraft to compete, the TCTO hampered some units in their ability to bring maintenance personnel to support Hawgsmoke 2008 as they worked at their home stations to inspect and repair A-10s. Still, the maintainers were able to meet the challenge.

"Everybody is [affected]," said Chief Master Sgt. Greg Wetzel, 442nd Maintenance Squadron. "Getting the rest of their fleet up to speed became a higher priority [but] we have enough people here to take care of everything. It's not really an issue."

Having the first two jets cross the airfield's center point is a source of excitement and relief for Whiteman's Citizen Airmen. It means that while the preparation has paid off and the competition is underway, there is still work to do as more aircraft arrive.

"We've only just begun," Major Bradfield said. "Having the 'iron' on the ground means the all of the work of the last two years, not only for the local community but for our own people, is starting to pay off."