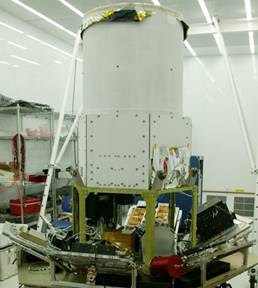 KIRTLAND AIR FORCE BASE, N.M. (AFMCNS) — The timeless saying every gray cloud has a silver lining aptly fits the Tactical Satellite-3 program during the past 60 days.

Initially scheduled to launch from NASA’s Wallops Flight Facility at Wallops Island, Va., in October, TacSat-3’s liftoff is now scheduled for January 2009 after the project team discovered, and then fixed, problems with the spacecraft’s Star Tracker apparatus. The team subsequently required additional time to evaluate the final version of flight software to ensure smooth operations during the one-year mission.

“We experienced a launch slip due to technical issues with the Star Tracker, which required modifications to the satellite and we also needed some extra time to finish baseline functional testing of the flight software,” said Thom Davis, TacSat-3 program manager. The program is part of the Air Force Research Laboratory’s Space Vehicles Directorate at Kirtland AFB. “The new launch date allows additional contingency for completing remaining testing requirements before shipping TacSat-3 to Wallops Island.”

TacSat-3’s Star Tracker unit will provide position updates to maneuver the 880-pound satellite to the precise location for mission operations. Scenario testing being performed on the spacecraft’s computer system through November will enhance that critical process. Once software assessments are accomplished, the program will conduct mission operations planning and dress rehearsals at the Space and Missile Systems Center’s Space Development and Test Wing at Kirtland AFB. In mid-December, TacSat-3 will be shipped to the liftoff site.

“We’re very disappointed at the program delays, but our testing has allowed us to fix problems that might have occurred shortly after liftoff,” Mr. Davis said. “I am now more confident that all TacSat-3 components will operate efficiently after launch.”