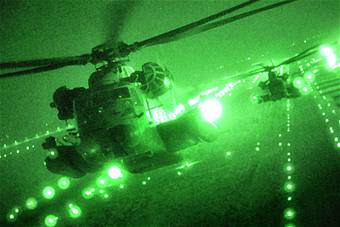 MH-53 Pave Lows from the 20th Expeditionary Special Operations Squadron fly over Iraq on their last combat missions Sept 27. The MH-53 is being retired after nearly 40 years of service to the Air Force. (U.S. Air Force photo)

The last mission, a SOF logistical resupply and passenger movement throughout central and southern Iraq, marks their last combat mission before the airframe retires after nearly 40 years in the Air Force inventory.

"We really feel like we are standing on the shoulders of giants," said Lt. Col. Gene Becker, the 20th Expeditionary Special Operations Squadron commander and a MH-53 pilot of 13 years. "(We owe it to) the folks, who over the past 40 years, have built the capability of this aircraft and the mission. We were just the lucky ones to be here at the end."

"We felt a great responsibility to close the MH-53's remaining months in the Air Force in a professional, disciplined and safe manner," he said. "At the end of the last mission, we felt like we achieved that goal. A goal, that we believe, was the best way to honor those (who contributed to) the last 40 years of this magnificent helicopter."

HH-53s, with their unique special operations mission and capabilities, have played a vital role in several operations during a career spanning four decades. The MH-53 was the lead command and control helicopter during a raid of Son Tay prison camp in 1970, a mission linked to improving conditions for prisoners of war in North Vietnam.

Again, in 1990, MH-53s led the way for Army AH-64 Apaches during an airstrike, which opened the air war in Operation Desert Storm. And since March 2003, the MH-53 has played a crucial part in special operations missions supporting Operation Iraqi Freedom.

The 20th ESOS MH-53 helicopters and their crews have provided much of the vertical lift, direct action and logistical resupply to the Combined Joint Special Operations Task Force in Iraq.

According to Air Force Special Operations Command officials, the MH-53 costs too much to maintain, fly and keep in the fight because of its age. Although its flying safety record is good, it has reached the end of its service life.

"It is a bittersweet ending," said Tech Sgt. Corey Fossbender, a 20th ESOS MH-53 aerial gunner and a crewmember on the lead helicopter during the final mission. "These birds have been around for so long. Our maintenance (teams) have basically been magicians keeping them in the air."

Sergeant Fossbender, who has spent 13 of his 16-year career in the MH-53 community, said he will miss the camaraderie the helicopter crews shared the most.

"It wasn't just a job, it was a brotherhood," he said. "A legacy is going away. With all the history they have been apart of, it's sad to see them go."

Senior Master Sgt. Mark Pryor, the 20th ESOS superintendent, will retire after more than 28 years; half of which he served as a flight engineer on the PMH-53.

"I don't think it has had an opportunity to sink in," Sergeant Pryor said. "When I grabbed those throttles and pulled them off for the last time and realized this is the last time I will fly on the Pave Low and work with this group of guys, it was bittersweet. The MH-53s are retiring, and then I retire. It's a perfect ending to a wonderful career."

From Iraq, some of the MH-53s will become relics of the past when they become displays in Air Force museums. Others will go to the Aircraft Maintenance and Regeneration Center at Davis-Monthan Air Force Base, Ariz.