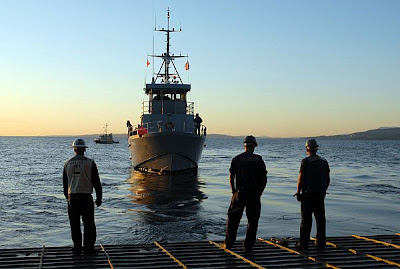 Rushmore entered the 56 square-mile Nanoose Range to serve as the main test platform for sea trials and to provide existing personnel, communication capabilities, and technological support to conduct a series of coordinated exercises with temporarily-installed test equipment and research teams located on the flight deck, and the Range Operations Center (ROC) located on Winchelsea Island overlooking the range.

"The ROC serves as the epicenter, or main hub for all of the data collected from the exercises being conducted on the range," said Range Officer, Canadian Armed Forces, Lt. Ralph Burgess. "In this particular series of exercises, we receive all the unrefined numbers, be it from Rushmore or any other smaller boats or aircraft contributing to operations, and store it both electronically and sometimes in hard copies for further analysis by the appropriate individuals or research teams."

During range testing, Rushmore acted as a target ship in a simulated hostile environment, receiving numerous incoming threats from various types of torpedoes ranging from one-at-a-time to multiple shot evolutions. The ship and the research teams aboard then deployed existing torpedo countermeasure technology like the SLQ-25C (NIXIE) as well some developing surface ship torpedo defense technologies like prototype anti-torpedo torpedoes fired from the flight deck of Rushmore.

Many different components must work in unison to ensure safe and successful exercises. A multitude of aircraft and smaller vessels play an integral part in range operations including the CP-140 Aurora Maritime Surveillance aircraft and the Canadian Armed Forces CH-124 Sea King.

After a particular exercise is complete, it is the responsibility of Navy divers to recover the buoyant test torpedoes. Working from Torpedo Weapons Retriever (TWR) small boats, the diver harnesses the floating torpedo, and the TWR crew uses a winch to pull it from the water and secure it to specially designed rollers for transportation to shore or one of the range's two 187-foot Yard Tender Torpedo (YTT) boats that have on-board underwater torpedo launch systems that fire the majority of the test torpedoes.

"I have had the pleasure of working with some of the finest Sailors the Navy has to offer on my TWR," said TWR small craft operator Mike Allen. "There have been some very testing times out here, unpredictable weather and sometimes unpredictable range schedules, but everyone does their part to accomplish the desired end result."

In addition to recovery by TWR, the range also possesses the capability to recover test torpedoes by helicopter and various underwater retrieval methods.

"The opportunities I have had to command Rushmore on deployment, participate in the Great White Fleet, and now to support future developments to improve amphibious ships' survivability against a subsurface threat underscores the importance of training the crew and maintaining a warship ready for tasking. It's an honor to serve on the ship selected to take part in this important operation."

Canadian Forces have operated a torpedo test range on the west coast of Canada since 1954, but in 1965 under an international agreement between Canada and the United States the Nanoose Range was officially established. Since then, Nanoose Range has played host to a wide variety of American and allied forces surface ships and submarines conducting high-tech and fast-paced exercises and experimentation for practical application in today's ever-changing global maritime environment.
at 10/17/2008 06:15:00 AM