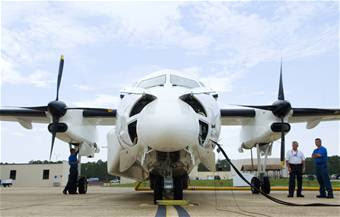 The E-9A is used as an airborne surveillance/telemetry data relay aircraft and its aircrews evaluate the total air-to-air capabilities of Air Force fighter aircraft and weapons.

"The (E-9A) is a modified DeHavilland Dash 8 civilian aircraft, modified with a sea surveillance radar and a telemetry antenna to go out and collect data on fired missiles," said Capt. Justin Allen, an E-9 pilot.

There are only two E-9As in the Air Force arsenal. Though small in number, the E-9A mission is anything but small, providing support for air-to-air weapons system evaluation, development and operational testing since 1988 at Tyndall AFB.

"It's awesome being a small part of a big moving machine that impacts the tactics and procedures fighters use on a daily basis," Captain Allen said.

In the first hour of a mission, the E-9A climbs to 5,500 feet scanning the ocean's surface for boat traffic. The E-9A doesn't direct traffic, it only tracks it, pinpointing and marking positions using sea surveillance radar capable of tracking 20 vessels within a 25 nautical mile radius. Latitude and longitude of each boat tracked is then transmitted by HF radio signals to the range safety officer on the ground who can see all the positions and establish a "shoot box" far enough away for exercise missions to take place.

"I help establish the battlefield in a sense," said George Mitchell, a sea surveillance radar operator aboard the E-9A.

Once the battlefield is established, the E-9A will climb to 18,000 feet keeping the right side of the aircraft pointing to the action to perform telemetry data collection.

"When we say telemetry, we say a digital data stream of one and zeros coming off of the item, in this case a missile. This information is broken up into words, blocks and bits of info that when added up can equal or represent velocity, altitude angle of movement," said Steve Reith of King Aerospace who operate and maintain the E-9As.

A large telemetry antenna created by Georgia Tech University in 1986 runs along the right side of the E-9A aircraft. The antenna is nearly 30 feet long with a cone range of 120 degrees and can collect data from five different targets. On average, the E-9A collects data about 30 miles away from its target, but the aircraft can be up to 130 miles away from a target to collect Navy Tomahawk missile data.

As a missile approaches its target, it sends off RF radio signals, that data is received, recorded and transmitted to the ground by the E-9A in real time. Due to the curvature of the earth, the E-9A aircrew act like middlemen relaying information to missile data analysts. Telemetry data such as the parameters of missile to drone closeness, the missile's reaction to countermeasures and percentage of kill are down linked. This information is then used by members of the 53rd Weapons Evaluation Group to write or re-write procedures on how to employ Air Force fighters better against simulated foreign aircraft.

"These missile tests we conduct are very important," said Don Anderson of King Aerospace. "It's important to test the same missiles we use in the field so we can find problems in test phases before they occur in combat."

The E-9A can be used for a myriad of operations such as research and development armament tests at Eglin AFB, Fla., Navy Harm and Tomahawk weapons evaluation, Army Patriot Missile tests and even search and rescue efforts with the Coast Guard.

E-9As are maintained and operated by King Aerospace, a privately owned company that also provides aircraft for heads of state and royalty around the world.

"We do everything on the aircraft besides providing the pilots," said Steve Reith. "There are very high standards here, it's not just a contract. King Aerospace feels a since of pride that we are helping America and that's from the owner on down."

A few years ago during a presidential visit to Tyndall AFB, maintainers from Marine One visited the King Aerospace facilities and commented that the E-9S was as well kept as Marine One or Air Force One respectively.

"We put a lot of pride into the E-9 and not just the skin, the whole aircraft is crisp and clean," Mr. Reith said.

Over the next two years, the E-9As are scheduled to undergo a series of digital and hardware upgrades to their sea surveillance and telemetry capabilities. The sea surveillance radar will be enhanced greatly to track 200 contacts with the ability to identify each contact as well as automatically update contact positions during a mission. The telemetry radar capacity will be doubled to track 10 missiles or targets at a time.

The E-9As are assigned to the 82nd Aerial Target Squadron located at Tyndall AFB. The squadron is a subordinate unit of the 53rd Weapons Evaluation Group and reports to the 53rd Wing at Eglin AFB.
at 10/22/2008 06:03:00 AM