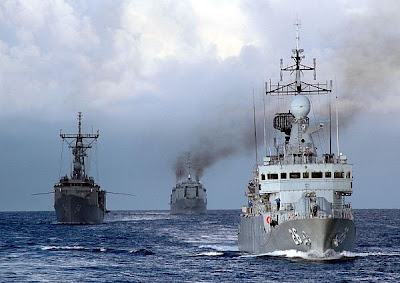 While deployed to the eastern Pacific, Ford, along with USS Jarrett (FFG 33) and USS Tortuga (LSD 46) participated in Combined Afloat Readiness and Training (CARAT), a series of exercises intended to bring about stronger international relations with many Southeastern Asian nations.

"[We] were able to visit Thailand, the Philippines, Brunei, Singapore, Malaysia, Indonesia and Japan," said Ens. Anthony Smith. "While we were in these countries, we participated in bilateral naval exercises, both in port and underway, which focused on interoperability between us and them, as well as between themselves."

Sailors received training for a variety of situations including anti-piracy, disaster relief, visit, board, search, and seizure tactics, multi-ship tactics, and anti-submarine operations.

"This was a very successful deployment," said Ford's Command Master Chief (SW/AW) Donald Eddleman. "We did about 30 [community relations] projects which included everything from handing out soccer balls and books to barbeque events. Our crew did something each day and promoted good relations with the people of the host nations. Each Sailor was an outstanding ambassador for the United States and the Navy."

"While we were in port, we had a wide variety of activities for the Sailors," said Commanding Officer, Cmdr. John Wilshusen. "We make an effort to get involved with multiple community relations-type projects. About 40 to 50 of my crew members were involved at any given time working with an orphanage, schools, hospitals, cleaning up parks or distributing toys which had been donated. The Sailors had a good time doing all those things and it's fun to watch."

Sailors aboard Ford encountered various challenges while at sea.

"We worked with six different navies in a span of approximately three and-a-half months, said Wilshusen. "Each navy had different capabilities, different language barriers and so on. It was a great challenge, but the crew overcame. Now the Sailors are able to enjoy a much needed rest."

Ford is the 48th ship of the Oliver Hazard Perry class frigates. The ship was named after Gunner's Mate 2nd Class Patrick Osborne Ford, who served in Vietnam as a patrol boat gunner, and received the Navy Cross.
at 10/01/2008 06:26:00 AM