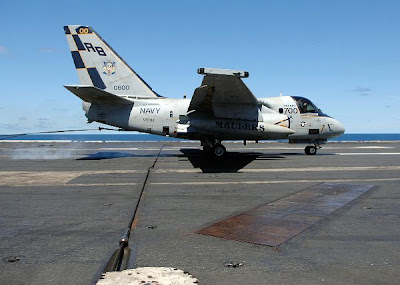 JACKSONVILLE, Fla. (NNS) -- Sailors, family members, retirees and friends of VS-32 turned out to bid farewell to the command during its disestablishment ceremony in Hangar 117 at NAS Jacksonville (NAS Jax)Sept. 25.

"This is an event that brings us closer the end of our S-3 community. The Maulers have always been one of the best-led and best-managed sea control squadrons in the fleet," said Capt. Jim Paulsen, commander, Carrier Air Wing 1 who was the guest speaker for the event.

"The S-3 sunset plan is part of the Navy's goal to streamline logistics and squadron support. The idea was that our mission can be assumed by other communities," stated VS-32 Commanding Officer Cmdr. Doug Carpenter. "But the legacy of our community and what this squadron has accomplished will live on."

He told the audience, including a dozen former VS-32 skippers, that the Maulers will be remembered for their years of battle readiness and safety in the S-3 community. The squadron earned 10 Commander, Naval Air Force Atlantic (COMNAVAIRLANT) Battle "E" awards; six Capt. Arnold J. Isbell trophies for excellence in anti-submarine warfare (ASW); six Adm. Jimmy Thach awards for meritorious achievement by an ASW squadron; and 15 Chief of Naval Operations Safety "S" awards. The squadron also received two Lockheed-Martin Golden Wrench awards for maintenance excellence; a COMNAVAIRLANT Silver Anchor award for retention; and the Arleigh Burke award for the most improved squadron.

"I can safely say that this squadron has sprinted to the finish line, thanks to the hard work and professionalism of a long list of distinguished Sailors that wear the Mauler patch with pride. At the top of that list is a man who I believe is a hurricane of energy and professionalism – my Command Master Chief, Adrian Andrews. When [Andrews] made landfall at VS-32 in 2007, he immediately set a course to unify the chiefs' mess, reinvigorate the career development process and provide a role model for positive leadership. It has been my honor to serve with Master Chief Andrews," said Carpenter.

As part of the ceremony, Paulsen presented Carpenter with the Meritorious Service Medal for his unmatched personal initiative and intense commitment to excellence that sustained high-tempo combat support operations during the squadron's sunset cruise.

Carpenter, in turn, presented the Navy and Marine Corps Achievement Medal to AE1(AW/SW) Robert Barber Jr., who is also VS-32's Sailor of the Year. His leadership for plane captains and troubleshooters in the line division led to the completion of 308 sorties and 520 mishap-free flight hours.

The Maulers completed their sunset cruise and the final carrier deployment for the S-3 Viking in December 2007. As a component of Carrier Air Wing 1, the squadron supported ground forces in Afghanistan and Iraq by conducting maritime security operations. During the deployment, Mauler aviators flew 960 sorties totaling more than 2,200 flight hours. The squadron was at sea for 180 days, with only 13 days in port.

The ceremony concluded as Carpenter read his orders and relinquished his command to close another chapter of the S-3 aviation family album. The Navy's only remaining S-3 squadron, the VS-22 "Checkmates," is slated for decommissioning at NAS Jax in January.
at 10/11/2008 08:16:00 AM