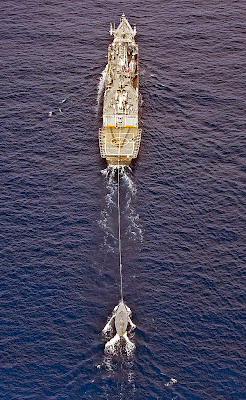 The highlight of the deployment came on Sept. 13, when the crew and embarked U.S. Coast Guard Law Enforcement Detachment (LEDET) 404 captured a Self Propelled Semi-Submersible (SPSS) vessel containing seven tons of cocaine and four suspected illicit-traffickers. Throughout their deployment, McInerney intercepted 22 tons of cocaine.

McInerney made its first port visit at the island of Roatan, Honduras. While in Honduras, crew members conducted a community relations project that brought fresh water to over 30 homes in La Colonia, Honduras. Sailors also donated two pallets of Project Handclasp materials to a local clinic. Through Project Handclasp, a worldwide humanitarian and goodwill program, the U.S> Navyt collects donations from various private-sector organizations and companies and delivers them to people in need.

The ship's last port visit was in Cartagena, Colombia. In preparation for the stop, McInerney assembled an entire bridge watch team of Spanish speakers who navigated the ship into Cartagena giving commands only in Spanish.

"This was McInerney's final tribute to all the amazing people we met throughout Central and South America over the past six months and also a demonstration of our commitment to strong maritime ties with allies in the region," said Commanding Officer, Cmdr. C. K. Wheeler.

In addition to the community project in Honduras, McInerney's crew dedicated their liberty time to two other projects. While in Salaverry, Peru, McInerney painted two large dormitory buildings for a local orphanage, which serve as home and school for over 45 children. McInerney Sailors also gave their time, working in conjunction with Colombian Navy Sailors to paint and rehabilitate a local school in Cartagena, Colombia, and donated much needed school supplies to the school that teaches over 220 students daily.

McInerney Sailors achieved success on all levels, as a unit and individually. During the deployment, 78 Sailors earned their Enlisted Surface Warfare Specialists (ESWS) pins.