Hawgsmoke to continue despite A-10 inspections

Editor Note: For my Milcom monitor readers in the mid-west, you will have an interesting monitoring activity in your neighborhood mid-month. 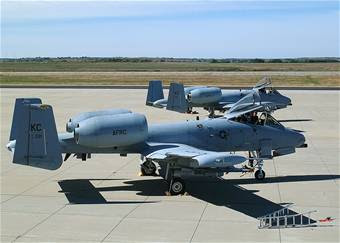 Twenty-five to 30 A-10 Thunderbolt IIs, like these, will participate in Hawgsmoke 2008 in Salina, Kan., Oct. 15 to 18, despite an Air Force time-compliance technical order issued Oct. 3 to inspect for wing cracks on 130 of the service's almost 400 A-10 aircraft. Hawgsmoke is an Air Force A-10 bombing and gunnery competition held every two years. (U.S. Air Force photo/Master Sgt. Bill Huntington)

Air Force officials issued a time-compliance technical order Oct. 3, requiring immediate inspection and repair of wing cracks on about 130 of the Air Force's some 400 operational A-10s.

The TCTO was prompted by an increase in fatigue-related wing cracks currently occurring in A-10 aircraft Air Force-wide. The inspections will occur on A-10s with thin-skin wings, installed during original manufacture, to ensure the operational safety of the aircraft.

"After talking to most of the other A-10 wings in the Air Force, we have more than enough teams committed to competing at Hawgsmoke to continue with the event," said Col. Mark Clemons, 442nd Fighter Wing commander. "We are really looking forward to Hawgsmoke and would like to thank the community of Salina for its outstanding support throughout the planning stages.

"Safety is paramount, and this TCTO will ensure we provide the safest possible aircraft to our A-10 pilots," he said. "We have plenty of aircraft to support Hawgsmoke and maintain the 442nd Fighter Wing's combat readiness."

The 442nd FW, an Air Force Reserve Command unit based here, is hosting Hawgsmoke. The event pits A-10 pilots and maintainers from across the Air Force against each other to determine a single-unit "Hawgsmoke Champion." The competition got its name from the A-10's nickname, "warthog."

While wing officials originally expected about 70 A-10 aircraft to attend the event, the inspections have reduced that number to 25 to 30 airplanes. Organizers expect as many as 14 teams of pilots will compete.

"The TCTO inspections have forced us to reduce the number of aircraft, but we are still expecting 250 to 300 people," said Lt. Col. Brian Borgen, Hawgsmoke coordinator. "We will basically share the limited number of aircraft among the pilots from all the teams."

The inspections are necessary to correct A-10 wing cracks, specifically on aircraft with thin-skin wings. This risk is of great concern to Air Force officials and represents a systemic problem for the aging Air Force fleet.

The A-10 is a ground-attack aircraft designed to support ground forces in combat. It can carry 16,000 pounds of ordnance and is equipped with a 30-mm cannon capable of punching through tank armor.