Skies clear as Hawgsmoke 2008 gets into full swing

Blog Editor Note: For my readers in the mid-west, the frequencies for Hawg Smoke 2008 at posted at the end of the article below. 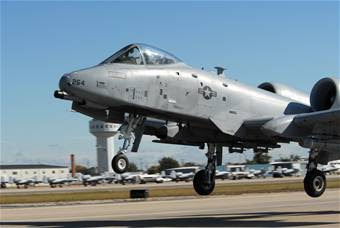 An A-10 Thunderbolt II from the Michigan Air National Guard's 110th Fighter Wing, takes off from the Salina, Kan., airport Oct. 15 for an orientation flight over the nearby Smoky Hill bombing and gunnery range. Thirty A-10s from Air National Guard and Air Force Reserve units across the country have converged on Salina for Hawgsmoke 2008, which will pit active-duty, Reserve and Guard pilots from 14 squadrons against each other in a bienniel bomb and gunnery competition. The competition will last through Oct. 18. (U.S. Air Force photo/Maj. David Kurle)

SALINA, Kan. (AFNS) -- With the arrival of the last group of A-10 Thunderbolt IIs late in the afternoon, Hawgsmoke 2008 got into full swing Oct. 15 as pilots flew out to the Kansas Air National Guard's Smoky Hill bomb and gunnery range nearby for range familiarization flights.

Clearing skies signaled the end of nearly two days of rain at the central Kansas location, as maintenance crews received the new arrivals while launching and recovering the local flights participating in the Air Force's biennial A-10 bombing and tactical gunnery competition.

As soon as the pilots stepped from the jets they were greeted by the supervisor of flying and transported to Hawgsmoke headquarters for an array of in-processing steps designed to make their arrival orderly, convenient and brief.

During the maintenance debriefing, officials gleaned the data provided by the incoming pilots regarding maintenance issues and passed problems along to the maintainers who focused on getting the jets ready to fly again. Most aircraft were back in the air after only a brief time on the ground.

"[For Hawgsmoke], debrief has been combined with (the maintenance operations center)," said Senior Airman Kimberly Byers, 442nd Aircraft Maintenance Squadron maintenance debriefer. "We've been getting [the pilot's] information about the incoming jets and now we are working on the sorties for the actual competition."

For having such a large influx of aircraft and crews in a very short time, things went well for Airman Byers. Her only challenge was learning the nuances of how each unit handled the data differently.

Ensuring the mission identifiers were closed out as the aircraft arrived was the first order of business for the command-post controllers at the next stop for each team. There activities were going as planned.

PERSCO representatives checked in all new arrivals to maintain the personnel accountability of not only the pilots, but also maintenance and support personnel.

At the final stop a lodging representative made sure each pilot had comfortable living quarters during the competition.

The whole process was well orchestrated and, as a result, the pilots could focus on getting oriented to the new surroundings.

As the first full day of Hawgsmoke 2008 ended, an A-10 "missing- man" formation flew over the "Hog" pilots gathered at the edge of the Salina Airport flight line for a memorial service, which commemorated all A-10 pilots who have perished over the years since the aircraft first flew.