Secretary of the Navy, Donald C. Winter announced Oct. 29 at a Navy SEAL Warrior Fund Benefit Gala at the Waldorf-Astoria Hotel in New York City, the name of the newest Zumwalt-class Destroyer will be USS Michael Monsoor.

Designated as DDG 1001, the name honors Petty Officer 2nd Class Michael Monsoor, a Navy SEAL who was posthumously awarded the Medal of Honor for his heroic actions in Ramadi, Iraq, Sept. 29, 2006.

Winter discussed the qualities, values and dedication to duty that Navy SEALs exemplify, including the extraordinary acts of Michael Monsoor.

"Tonight I would like to single out one of those heroes from the community of Navy SEALs," Winter said. "Those who served with Michael Monsoor will remember him always as a consummate professional who faced terrorist enemies with aplomb and stoicism."

"The full extent of Michael's courage, gallantry and selfless heroism were revealed on the 29th of September, in Ramadi. When his team was surprised by an enemy grenade, Michael could have escaped and saved himself," Winter said. "But he chose a different path, a path of honor that embodies the way of a Navy SEAL. For having chosen that path, Petty Officer Michael Monsoor joined the ranks of those who have earned our nation's highest distinction, the Medal of Honor."

Winter concluded that Michael Monsoor's heroism and self sacrifice for his teammates and his nation epitomize the Navy's core values and will forever provide prideful admiration for our Sailors.

"Michael Monsoor's name will now be linked with one of our nation's most visible examples of military power, a U.S. Navy warship," Winter said. "His legacy will inspire the hearts of future Sailors who serve on the ship that bears his name."

The USS Michael Monsoor will be a multi-mission surface combatant tailored for advanced land attack and littoral dominance. The ship's mission is to provide credible, independent forward presence and deterrence and to operate as an integral part of naval, joint or combined maritime forces.

The USS Michael Monsoor will be the second Zumwalt-class destroyer. The ship will be 600 feet in length, have a beam of 80.7 feet and displace approximately 15,000 tons. Michael Monsoor will have a crew size of 148 officers and Sailors; it will make speed in excess of 30 knots. 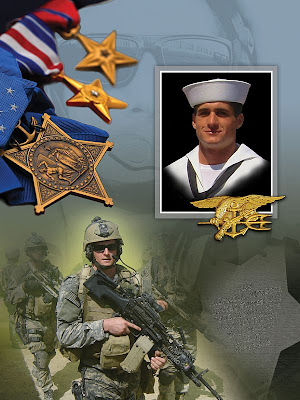 Photo Illustration commemorating the Medal of Honor presented posthumously to Master at Arms 2nd Class (Sea, Air, Land) Michael A. Monsoor.
at 10/31/2008 07:53:00 AM