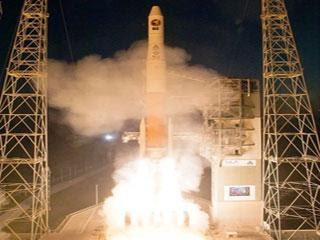 Blog Editor Note: The NROL-27 payload is believed to be a Satellite Data System communications satellite that is headed for geostationary orbit.

This is the fifth in a series of six launches scheduled during the NRO 50th anniversary year in 2011.

"I am extremely proud of the entire government and contractor team who supported this launch," said Col. Alan Davis, the director of the Office of Space Launch in the National Reconnaissance Office. We have had an amazing five successful launches in the past 12 months, two in 2010 and three this year. I am looking forward to the launch of NROL-34 in April, which will conclude our most aggressive launch schedule in over two decades.

The Delta IV is one of two EELV's used by the Air Force. The wing launched the other EELV, an Atlas V, March 5.

"This mission helps ensure that crucial NRO resources will continue to strengthen our national defense," said Col James Ross, the 45th Space Wing vice commander. "The teamwork used to make this launch a success is one example of how the 45th (Space Wing) delivers assured space launch, range and combat capabilities for the nation."

Courtesy of AGI's Launch Notification e-mails. AGI's E-mails are sent after every launch and include key spacecraft information such as: the date, time, launch site, launcher, international number, name, and owner. Get more information on thousands of satellites and other vehicles by viewing STK models, animations, and our encyclopedic "Spacecraft Digest" database at www.agi.com/scdigest.

"A new U.S. spy satellite soared into the sunset sky above Florida today (March 11) on a clandestine mission to preserve national security.

"The satellite launched into space atop an unmanned Delta 4 rocket that lifted off from the Cape Canaveral Air Force Station at 6:38 p.m. EST (2338 GMT). High-altitude winds above the Air Force station's Launch Complex 37 delayed the satellite's launch by nearly a half hour, but cleared in time for a dazzling twilight blastoff.

"Rocket launch provider United Launch Alliance orchestrated the satellite's trip to orbit for the National Reconnaissance Office. The Chantilly, Va.-based NRO is responsible for the design, construction and operation of the country's network of intelligence-gathering spy satellites."

"The new satellite is part of the military's national defense program. Due to the classified nature of the mission, which is formally known as NROL-27, very few additional details about the launch or the satellite's purpose are publicly released. The mission went into a media blackout shortly after its successful liftoff."