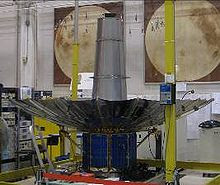 Blog Editor Note: For my Milsatcom monitoring friends, we will soon have a new UHF milsat to monitor. My best guess is they may use one of the old Leasat bandplans (i.e. Whiskey). We shall see soon.

Funded by the Office of Naval Research (ONR), the Tactical Microsatellite (TacSat)-4 is smaller in size, lower in cost and relatively quicker to launch than a traditional system. TacSat-4 is designed to augment traditional satellite communications, supplying 10 legacy ultra-high-frequency channels. It can provide two hours of coverage up to three times per day and support multiple theaters worldwide in a 24-hour period.

The fourth-generation microsatellite is expected to be launched in May or June. Following that milestone, the initial transmission of data will be available approximately 30 days later.

Additionally, TacSat-4 enables "comms on the move", said Fred Hellrich, an ONR senior scientist. "That is a unique feature of this system - no other DOD satellite system can do it currently."

Unlike traditional satellites that require antennae to be set up in the field for data transmission, TacSat-4 allows warfighters to use a regular handheld radio for communications on the move. TacSat-4 has also been developed to operate more economically than traditional satellites by using high-quality components designed to last at least six months to one year. It is also changing the cost to build systems and thus the number of launches per year.

The satellite will carry an ONR-sponsored and Naval Research Laboratory (NRL)-developed payload. Those components will be carried on a bus built by The Johns Hopkins University Applied Physics Laboratory. The U.S. Air Force's Operationally Responsive Space Office funded TacSat-4's launch aboard a Minotaur IV rocket built by Orbital Sciences. The collaboration among government, industry and academia was a significant step in TacSat-4's success.

TacSat is one of the original four proposed efforts initiated by ONR's INP program, which investigates cutting-edge technologies with the potential to irrecoverably change naval operations.

TacSat was inspired by Vice Adm. Arthur K. Cebrowski, the former director of the Office of Force Transformation, who wanted a simplified satellite that could be built and launched quicker than traditional ones.

The Department of the Navy's Office of Naval Research (ONR) provides the science and technology necessary to maintain the Navy and Marine Corps' technological advantage. Through its affiliates, ONR is a leader in science and technology with engagement in 50 states, 70 countries, 1,035 institutions of higher learning and 914 industry partners. ONR employs approximately 1,400 people, comprising uniformed, civilian and contract personnel, with additional employees at the Naval Research Lab in Washington, D.C.

What Is It?
TacSat-4 is a Navy-led joint mission to provide relevant capabilities and to enable Operationally Responsive Space. TacSat-4 provides ten Ultra High Frequency (UHF) channels, which can be used for any combination of communications, data ex-fi ltration, or Blue Force tracking. Notably, TacSat-4 provides communications-on-themove with legacy radios and provides a wide band "MUOS-like" channel for early testing.

How Does It Work?
TacSat-4 uses relatively low-cost, small satellite and launch vehicle technologies. The spacecraft is 450kg with a 1000W solar array and a 12 foot diameter payload antenna to provide high gain, enabling most communications-on-the-move to be supported without ground antenna pointing. A "low HEO" (highly elliptical orbit) with a 4 hour period (6 orbits per day) provides long dwells over theaters.

What Will It Accomplish?
TacSat-4 will augment operational communications. Ten UHF channels will allow communication-onthe-move, data-exfl itration, and Blue Force tracking. The unique orbit augments geosynchronous communications by allowing near global, but not continuous, coverage including the high latitudes.

The Tactical Microsatellite (TacSat) Innovative Naval Prototype (INP) program began in FY06 to prototype new naval space capabilities. This INP represented the Navy’s first science and technology investment in response to the Department of the Navy’s Space Policy approved in 2005, which emphasized the need for Navy to invest in space science, technology, research and development. The initial investments were aligned with the Navy’s 2005 Wald study, which stated the need for space to improve maritime domain awareness, data-exfi ltration, sub-detection, and communications-on-the-move (a Marine-stated need). TacSat-4 supports three of these areas and has been developed applying FORCEnet principles for user capabilities and collaboration.

The Minotaur-IV launch vehicle will be used to achieve orbit. A single satellite can provide 2 hours of coverage three times a day over a given theater (2000nm diameter), as well as support multiple theaters throughout the world each day. Users will use their existing equipment or early wide-band radios, when applicable. Advanced capabilities such as bridging multiple channels, converting UHF voice comms to SIPRNET, or specifi c data ex-fi ltration scenarios such as buoy collections transmitted to Navy ship IP networks, will be provided with unique terminals each supporting a 2000nm area. The Blossom Point (BP) Ground Station in Maryland provides the command and control for TacSat-4 and maintains its user tasking system. BP’s
flexible common ground architecture allows rapid transitions and enables net-centric operations. Payload tasking will be performed via the SIPRNET-based Virtual Mission Operations Center, with frequencies allocated by the Joint Task Force-Global Network Operations and theater managers, as appropriate.
at 3/19/2011 11:55:00 AM