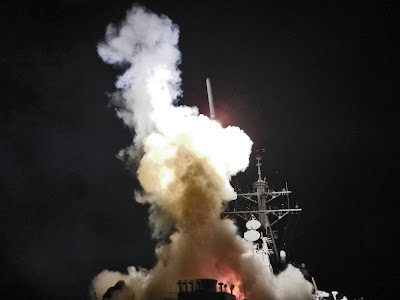 Cruise missile launch from the USS Barry enroute to the Libyan coastline. (Courtesy of the US Navy)

Blog Editor Note: US Navy has launched 112 cruise missiles against 25 Liyban air defense targets, mostly on or near the coast: Pentagon press briefing. More information on our MilcomMP twitter feed.

The goal of the military coalition is to prevent further attacks by regime forces on Libyan citizens, officials said, adding that the coalition also wants to degrade the ability of Moammar Gadhafi's regime to resist a no-fly zone being implemented.

U.S. military forces are on the leading edge of the coalition operation, taking out Libya's integrated air and missile defense system, Defense Department officials said. The ordnance is aimed at radars and anti-aircraft sites around the capital of Tripoli and other facilities along the Mediterranean coast.

Cruise missiles from U.S. submarines and frigates began the attack on the anti-aircraft system. A senior defense official speaking on background said the attacks will "open up the environment so we could enforce the no-fly zone from east to west throughout Libya."

In addition to the cruise missiles, the United States will provide command and control and logistics. American airmen and sailors also will launch electronic attacks against the systems.

The United Kingdom, France, Italy and Canada already have announced that they are part of the coalition. Officials expect Arab countries will publicly announce their participation soon.
at 3/19/2011 06:03:00 PM