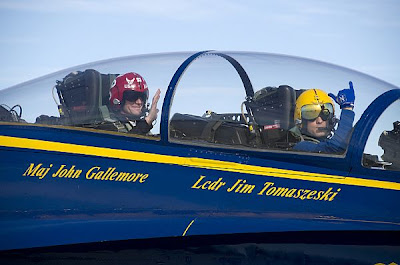 Blog Editor Note: Now as we get into the air show season, I want to remind my readers that your air show reports are critical to keeping our annual MT Air Ahow Guide up-to-date. Please send your reports to the email address in the masthead above. Even if the freqs are on our list, we use all the freqs heard at a show to confirm and verify the frequency information we provide in our guide. If you hear it, we can use it. As always we are grateful for any and all reports we receive during the air show season.

The show featured more than 20 events, multiple military and civilian aerial demonstrations, as well as vintage aircraft on static display.

"It's an opportunity to give back to the community for all the support the community gives us throughout the year," said Cmdr. Erik Franzen, NAF El Centro executive officer. "It's kicking off the air show season."

One of the highlights during the air show was the Blue Angels, the Navy's Flight Demonstration Squadron.

"NAF El Centro is the winter home to the Blue Angels," said Franzen. "They do all of their practicing here in preparation for their upcoming show schedule. Their first show is here at NAF El Centro every year."

"I saw the Blue Angels in 1964, and they haven't changed," said Ed Chadek, a spectator at the air show. "They are just awesome; it was a great show."

A member of the "Black Daggers", the United States Army Special Operations Command Parachute Demonstration Team, displayed the American flag for the national anthem during a jump demonstration that opened the show.

"We bridge the gap between the American public and the military, to let them know what their special operations or armed forces are capable of," said Staff Sgt. Noah Watts, Black Daggers demonstrator and assistant team leader. "It is a great response. We walk around, everyone is cheering, they want to come up and shake your hand. Little kids want to give us high fives. It's a really great opportunity for us to give back to the supportive community."

The Black Daggers team members are comprised entirely of volunteers from the Army special operations community.

The owners and operators of many of the vintage and current aircraft were on hand to share their knowledge and their passion for aviation.

"You have such an enthusiastic crowd out here and great people," said John Collver, an air show pilot. "It is just a joy to fly for them and share my passion."

The crowd cheered and applauded as the pilots performed aerobatics and races during the show. The air show also featured pyrotechnics demonstration put on by Explosive Ordinance Disposal Mobile Unit (EODMU) 11 detachments from Fallon, Nev., and San Diego.

"I loved it, just like old times," said Alex Hooper, a spectator at the air show. "My father used to bring me out here as a little boy, and I thought I would give the experience to my son."

This year's air show was both a celebration of the "Centennial of Naval Aviation" and the relationship between NAF El Centro and the local community.

"I saw a wonderful interface between the military and the local community, and that is indeed a rarity," said William G. Vasilovich, official announcer for air show. "That's really a tribute to the efforts that the folks here at NAF El Centro make."
at 3/14/2011 09:31:00 AM