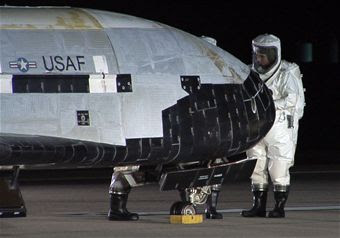 After an intense search, a crew of amateur satellite sleuths has spotted the U.S. Air Force's second X-37B space plane – a robotic spacecraft that launched into orbit March 5.

The mission of the unmanned X-37B space plane, which is known officially as the Orbital Test Vehicle 2 (OTV-2), is shrouded in secrecy. The Boeing-built spacecraft is believed to be involved in reconnaissance — perhaps testing powerful sensors for a new generation of spy satellites. It looks much like a small version of NASA's space shuttles and blasted off from the Space Launch Complex 41 at Cape Canaveral Air Force Station in Florida.

While its mission is secret, the OTV-2 itself has attracted the eyes of dedicated skywatchers hoping to spot it in orbit just as they saw its predecessor – the first X-37B spacecraft, OTV-1 – during the OTV-1's months-long flight last year.

You can read the rest of this interesting story by clicking here.

And here are the latest orbital elements for OTV-2 the X-37B spacecraft from Ted Molczan via the SEESAT-L newsgroup mentioned in the article on FNC/Space.com.