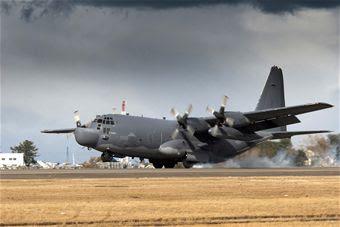 An MC-130H Combat Talon II lands March 16, 2011, at Sendai Airport, Japan. This is the first fixed-wing aircraft to land at the airport since an earthquake and tsunami crippled much of the Japanese eastern seaboard March 11. A team of combat controllers from the 320th Special Tactics Squadron, out of Kadena Air Base, Japan, along with Japanese emergency management organizations, cleared a section of the runway and re-established the control tower to direct flights in and out of the airfield. (U.S. Air Force photo/Staff Sgt. Samuel Morse)

Facilities and airfields at Matsushima Air Base and Sendai Airport were damaged by the 8.9-magnitude earthquake and resulting tsunami that rocked northeastern Japan March 11.

Airmen from the group, headquartered at Kadena Air Base, Japan, departed here in the early morning March 16 on a 17th Special Operations Squadron MC-130P Combat Shadow to survey and reopen the airfields. About 40 minutes later, the highly-trained aircrew was able to land the special operations aircraft at Matsushima Air Base even though the air traffic control was not up and running.

Immediately after landing, Airmen were offloading equipment and vehicles to reestablish the Matsushima Air Base and Sendai Airport runways.

At the same time, another team of combat controllers and Japan Self Defense Force personnel drove to Sendai Airport, which is about 25 miles away from the air base, to conduct surveys and set up their air traffic control equipment.

Sendai was heavily damaged by the tsunami and littered with debris. The tsunami that hit the airport made this one of the roughest airfields from which to operate, according to the 320th STS commander.

"The surveys we conducted from the air a few days ago didn't give us the complete picture of how bad this airport was hit," said. Maj. John Traxler. "We knew there was a substantial amount of debris scattered over the airfield, but when you see it at ground level you fully understand the destruction caused here. I've worked out of several austere and damaged airfields, but this is the most devastated place I've seen."

Within hours of arriving at the airport, the combat controllers had completed their surveys, marked the useable portion of the runway, set up their equipment and provided air traffic control support to clear their first aircraft to land, an MC-130H, which carried equipment needed to establish aerial port operations and relief supplies for the surrounding areas.

The first aircraft to land at Sendai Airport also carried the 353rd SOG commander. The colonel noted the condition of the area, as well as the hard work still being put in by the combat controllers and JSDF personnel.

"Despite the total devastation, the resiliency and strength of the Japanese people was clearly evident," said Col. Robert Toth. "They have been working around the clock since the tsunami to remove debris. Because of their hard work, we were able to land here today, open the airfield, and provide assistance."

Currently, the combat controllers and Japanese officials are manning the airfields to support fixed- and rotary-wing aircraft assisting relief operations.
at 3/17/2011 07:46:00 AM