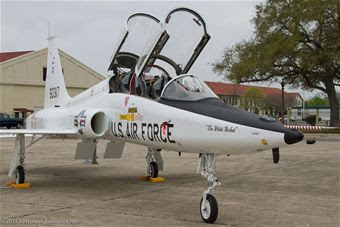 This T-38 Talon, on the flightline March 17, 2011, at Randolph Air Force Base, Texas, has been painted with a special commemorative color scheme, giving the plane an appearance similar to its original 1961 look. (Courtesy photo/Jo Hunter)

The T-38 was first deployed in March 1961, and has served as a training vehicle for multiple generations of pilots and pilot instructors throughout its five decades of service.

"The T-38 has been an instrumental and foundational element (of pilot training) over the last 50 years," Colonel Murphy said. "The Talon continues to develop our combat Air Force pilots as they learn aviation and warfighting skills that are needed for today's Air Force and for our future."

The T-38 prepares pilots to fly fighter and bomber aircraft, including the F-15 Eagle, the F-16 Fighting Falcon and the B-1B Lancer.

"The aircraft obviously has been a tremendous work horse," Colonel Murphy said. "(And it will) continue to serve in this capacity for the foreseeable future."

Reflecting on the legacy of the T-38, Gen. Edward A. Rice Jr., the commander of Air Education and Training Command, said the 50-year history of the aircraft represents a "fundamental truth" about the Air Force.

"The Air Force utilizes the best equipment, provides the best training and possesses the world's most qualified and dedicated instructor pilot force," he said. "The complexity of both the modern battlespace and that of our aircraft inventory have increased dramatically, and the T-38 has evolved to meet these very, very high demands. From the 'glass cockpit' and a heads-up display, to numerous structural upgrades, the Talon has embodied the phrase, 'flexibility is the key to airpower.'"

The general went on to recount the T-38's history, beginning with its first flight as a test aircraft in 1959, in the shadow of NASA's human spaceflight program.

"What you may not know about the T-38 is that its maiden flight was on April 10, 1959 -- the day NASA (officials) held their first press conference with the Mercury astronauts who went into space," he said. "While the eyes of the nation were fixed on space flight and later on a voyage to the moon, the T-38 team was quietly building a foundation of excellence upon which the Air Force would build its pilot force for decades and decades to come."

General Rice said the effectiveness of the T-38 was proven during the Vietnam War and continues to this day.

"Just a few years after its first flight, the T-38 graduates were tested in combat in the skies over Vietnam," he said. "It is difficult to overstate the legacy of the T-38 Talon and the effect it has had on sustaining the finest pilot training program in the world."

In honor of the aircraft's 50th anniversary, retired Lt. Col. Donald Wheeler, one of the first graduates of the T-38 training program, arrived at the ceremony in the rear seat of a T-38 painted with a special commemorative color scheme, giving the plane an appearance similar to its original 1961 look.

The colonel said he believes the Air Force has one of the best pilot training programs in the world, and that his training aboard the T-38 was advantageous to his career as a pilot.

When asked if the T-38 feels different now than it did on his early flights, he said, "Yeah, I'm older now."

Though the T-38 has served the Air Force for 50 years, General Rice said it will continue to serve as a training platform for future Air Force pilots.

"Over the next few years, new pilots will continue to learn their craft in this wonderful, wonderful aircraft, the T-38," he said. "And one day, these young men and women will ascend to fill the ranks of Air Force senior leadership. So no matter what the future holds, the legacy of the T-38 Talon is secure in the experiences and the memories of this new generation of Air Force aviators."

Colonel Murphy said that while much has changed in the world since 1961, there is one thing that has not changed.