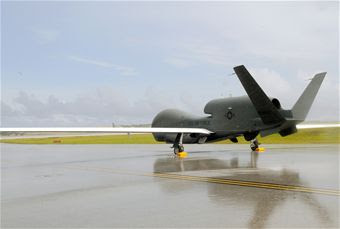 An RQ-4 Global Hawk like the one pictured is being used to assist Japan in disaster relief and recovery efforts. (U.S. Air Force photo/Senior Airman Nichelle Anderson)

JOINT BASE PEARL HARBOR-HICKAM, Hawaii (AFNS) -- Pacific Air Forces officials are using an RQ-4 Global Hawk from Andersen Air Force Base, Guam, to assist Japan responders in disaster relief and recovery efforts, following the March 11 earthquake and the resulting tsunami off the eastern coast of Japan.

The Global Hawk, a high-altitude, long-endurance unmanned aircraft, is being used to help assess damage to towns, industrial infrastructure and other facilities affected during the earthquake and flood waters.

"The Global Hawk is an ideal ISR asset to aid in disaster relief," said Gen. Gary North, the PACAF commander. "It directly complements ongoing efforts in the region and represents how advanced technology can provide crucial and timely support to senior officials and search, recovery and disaster relief efforts."

The Global Hawk also was used for disaster relief efforts following the 7.0-magnitude earthquake that struck Haiti in January 2010, officials said. This will be the aircraft's first use in a humanitarian operation in the Pacific theater since it was permanently assigned at Andersen AFB in September 2010.

With approximately 30 hours of flight endurance, the Global Hawk provides a broad view of the situation on the ground, officials said. Its ability to survey large geographic areas also offers decision-makers and first responders near real-time information to assess damage and prioritize for local need. Its long airborne dwell capacity also assures continuous and long-lasting-support for whatever requirements Japan's government officials may require.

"The Global Hawk and the expertise offered by our Airmen further enhances the country's already robust capabilities as our Air force members work side by side with Japan's Self Defense Force professionals," General North said.

The aircraft allows the U.S. to effectively support contingencies throughout the region, demonstrating a commitment to partners throughout the Pacific, and is one part of a wide range of PACAF personnel and aircraft that are supporting the Japanese operations, officials said.
at 3/17/2011 08:03:00 AM