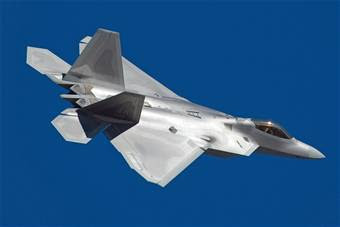 Eight F-22 Raptors and 132 Airmen from Elmendorf Air Force Base completed the first deployment from Alaska as Reserve and active-duty Airmen combined for training Feb. 2 through 17 at Tyndall AFB, Fla.

The Airmen worked side-by-side to accomplish the mission during Combat Archer, an assessment conducted to prepare and evaluate an operational fighter squadron's readiness for combat operations. The program evaluates all phases of combat operations from weapons loading to aircraft and aircrew performance.

It is unique to the Air Force and is the only test or evaluation program that uses operational aircrews, maintainers, aircraft and weapons.

"WSEP gives us the opportunity to employ air-to-air weapons in as close-to-combat environment as possible," said Maj. David Piffarerio, a 302nd Fighter Squadron pilot and project officer for Combat Archer. "Fourteen out of 16 of our missiles met WSEP hit criteria and passed within the lethal radius or hit the drone. The successful deployment of WSEP means the 3rd Wing is one step closer to initial operation capability."

This deployment gave F-22 pilots the opportunity to shoot a live missile at the combat banner, a target towed by a Learjet to evaluate live air-to-air gunnery. Additionally, maintainers and weapons specialists witnessed the capability of the aircraft.

"The main benefit for me was to see the missile system work. We usually load and unload and never see the jet come back empty," said Senior Airman Austin Shippy, a 477th Maintenance Squadron weapons specialist. "We now know these systems do what they say they do."

The deployment also gave reservists and active-duty members a chance to work in a deployed environment.

"I have to look at the patches to tell who is from the 477th Fighter Group and who is from the 3rd Wing," said Capt. Megan Rogers, the 3rd Wing deployed maintenance commander. "Everyone has the same mission, and everyone works hard to make sure it gets done. In years to come, the Reserve will bring experience to our mission. They will still be around even after a lot of us have rotated out and will be able to provide continuity to our mission here."

The fighter group was activated in October 2007. It is an associate unit responsible for recruiting, training, developing and retaining citizen Airmen to support 3rd Wing and expeditionary Air Force mission requirements.

They are functionally integrated with their active-duty Air Force partners in almost all mission areas to increase efficiency and overall combat capability while retaining Reserve administrative support and career enhancement.

Combat Archer marked the first time the 477th FG and 3rd WG deployed together and tested its combat capability.

"The successful completion of Combat Archer proves that the weapons system is ready and mature," said Brig. Gen. Thomas L. Tinsley, the 3rd Wing commander. "The Airmen -- both active-duty and Reserve -- are experienced, and the 3rd Wing, if called upon, would be able to deploy."
at 2/22/2008 09:35:00 AM