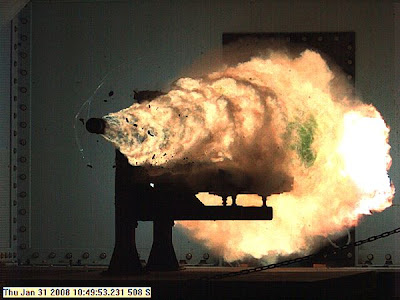 Photograph taken from a high-speed video camera during a record-setting firing of an electromagnetic railgun (EMRG) at Naval Surface Warfare Center, Dahlgren, Va., on January 31, 2008, firing at 10.64MJ (megajoules) with a muzzle velocity of 2520 meters per second. The Office of Naval Research's EMRG program is part of the Department of the Navy's Science and Technology investments, focused on developing new technologies to support Navy and Marine Corps war fighting needs. This photograph is a frame taken from a high-speed video camera. (U.S. Navy Photograph)

An invited audience, including the Chief of Naval Operations Adm. Gary Roughead, who witnessed this revolutionary technology in action.

Roughead noted, "We should never lose sight of always looking for the next big thing, always looking to make our capability better, more effective than what anyone else can put on the battlefield."

He emphasized, "I never ever want to see a Sailor or Marine in a fair fight. I always want them to have the advantage."

"We are seeing the culmination of years of research coming together to bring focus to exciting new technology," said Chief of Naval Research, Rear Adm. Bill Landay. "Here at ONR we are striving to move S&T from vision to results."

The technology uses high power electromagnetic energy instead of explosive chemical propellants (energetics) to propel a projectile farther and faster than any preceding gun. At full capability, the rail gun will be able to fire a projectile more than 200 nautical miles at a muzzle velocity of mach seven and impacting its target at mach five. In contrast, the current Navy gun, MK 45 five-inch gun, has a range of nearly 20 miles. The high velocity projectile will destroy its targets due to its kinetic energy rather than with conventional explosives.

The safety aspect of the rail gun is one of its greatest potential advantages, according to Dr. Elizabeth D'Andrea, ONR's Electromagnetic Railgun Program Manager. Safety on board ship is increased because no explosives are required to fire the projectile and no explosive rounds are stored in the ship's magazine.

Science and technology challenges met by ONR in the development of the rail gun include development of the launcher, pulse power generation and the guided projectile design. The program's goal is to demonstrate a full capability, integrated railgun prototype by 2016-2018.
at 2/02/2008 09:32:00 AM