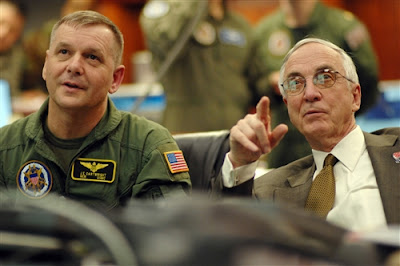 HONOLULU, Feb. 21, 2008 – Defense Secretary Robert M. Gates was pleased when he learned a U.S. Navy missile hit the crippled spy satellite that was falling out of orbit and threatening to spill its toxic rocket fuel upon re-entry.

Defense officials could not immediately confirm that the fuel tank had been hit, and said they hope to know for sure by late tonight.

“The secretary was obviously very pleased to learn that, and he congratulated General Cartwright and General Chilton, as well as their teams, on a job well done,” Morrell said.

At about 1:40 p.m. EST yesterday, while en route to Hawaii from Washington, Gates held a conference call with the two generals and was told the conditions were “ripe” for an attempt. That is when the secretary gave the go-ahead for the Navy to take the shot, and he wished them luck in their attempt, Morrell said.

At about 10:26 p.m. EST, a U.S. Navy Aegis warship, the USS Lake Erie, fired a single modified tactical Standard Missile 3, hitting the satellite about 133 nautical miles over the Pacific Ocean as it traveled in space at more than 17,000 mph, according to a Defense Department statement.

The objective was to rupture the fuel tank to dissipate the roughly 1,000 pounds of hydrazine, a hazardous fuel that could pose a danger to people on Earth.

“The secretary, like all of us, is standing by to learn more how successful the intercept was,” Morrell said. “After all, the goal here was not just to hit the satellite. The goal here was to hit and destroy the fuel tank to eliminate it as potential danger to those of us here on Earth.”

Because of the relatively low altitude of the satellite at the time of the engagement, debris would have started re-entering the earth's atmosphere immediately, officials said, and nearly all of the debris will burn up on re-entry within two days.

Should any large pieces of the satellite’s debris make it to Earth, special teams are on alert and positioned within the U.S. Pacific Command, Navy. Adm. Timothy J. Keating, PACOM commander, told reporters traveling with the secretary shortly after Gates landed here.

“(The teams are there) to lend assistance should parts of the satellite survive the missile impact and hit,” he said. “We don’t think the hydrazine container is going to hit. That’s why we’re shooting at it. But if it does, we’re prepared to assist with specially trained teams that are on alert at various places throughout our area of responsibility.”

Joint Chiefs of Staff Chairman Navy Adm. Mike Mullen also spoke to reporters here and said the shoot-down does not threaten any country and is not a new space race with any country.

"What we've tried to do from the beginning was be as open as possible about the intention," the chairman said during a news conference at Hickam Air Force Base. "We are taking the shot at what we hope will be an altitude that will minimize the amount of space debris that will occur. We've engaged governments throughout the world to tell them what our intentions are. We have been very transparent, very open in that regard."

The admiral made a point that the Navy's Standard Missile 3 had to be modified to fly the mission at all, and that it would be used only in this kind of emergency response to similar potential dangers.

Gates stopped in Hawaii on the first leg of a nine-day trip around the world aimed at reinforcing relationships with some countries he has yet to visit as defense secretary. In addition to U.S. Pacific Command here, the secretary will participate in annual bilateral talks with Australia, and discuss security matters with his counterparts in Indonesia, India and Turkey. 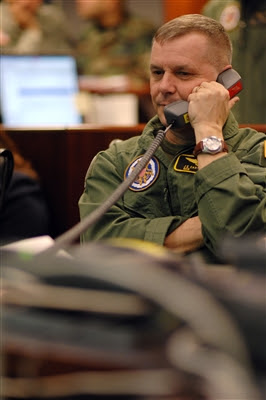 Vice Chairman of the Joint Chiefs of Staff Gen. James E. Cartwright, U.S. Marine Corps, informs Secretary of Defense Robert Gates of the successful missile intercept from the Pentagon’s National Military Command Center on Feb. 20, 2008. The USS Lake Erie (CG 70) launched the missile at the satellite as it orbited in space at more than 17,000 mph over the Pacific. The objective was to rupture the satellite’s fuel tank to dissipate the approximately 1,000 pounds (453 kg) of hydrazine, a hazardous fuel which could pose a danger to people on earth, before it entered into earth's atmosphere. (DoD photo by Air Force Tech. Sgt. Adam M. Stump)
at 2/21/2008 09:00:00 AM