USS Augusta Inactivated After 23 Years of Protecting the Frontier 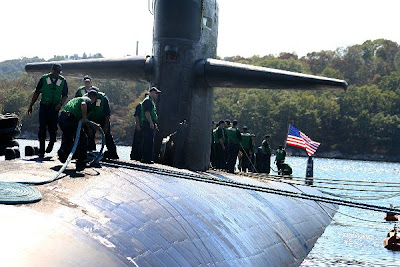 Augusta lived up to its motto, "protecting the frontier" for more than two decades. Most recently, she returned from a six-month deployment to the U.S. European Command's area of responsibility September 2007, where she completed a wide range of joint requirements supporting national security.

Retired Capt. Thomas Turner, Augusta's first commanding officer, was the guest speaker and relived his experience in bringing the ship to life.

"The feeling as the crew ran aboard at the commissioning was incredible," said Turner. "The crew is what makes the ship a ship. Everything else is just an empty hull."

"Augusta will not be forgotten," said Brown. "The tradition and spirit of excellence will live on in the Sailors who proudly served aboard her."

Numerous plank owners and Augusta Alumni Association members attended the ceremony. The alumni association plans on forming a nonprofit organization to promote the purchase of Augusta's sail as a memorial for the state of Maine.

"I feel blessed to have been an Augusta crew member," said Malcolm Milligan, alumni association founder. "Our experiences as crew members give us a lot in common and many stories to share and we wish to share those experiences with the residents of Maine."

Augusta is the fifth ship of the fleet to bear the name Augusta, and the first to be named for the capital of the great state of Maine. Others include a 14-gun brigantine commissioned in 1799; a side wheel steamer that participated in the Union forces capture of Port Royal, N.C. in 1861; a motor patrol boat used for maritime patrol of the U.S. coast in World War I; and a heavy cruiser commissioned in 1931 and built specifically as a command ship.

Augusta will transit to Norfolk Naval Shipyard in Portsmouth, Va. later this month to commence its inactivation process.

With stealth, persistence, agility and firepower, fast-attack submarines like Augusta are multi-mission capable – able to deploy and support special force operations, disrupt and destroy an adversary's military and economic operations at sea, provide early strike from close proximity and ensure undersea superiority.
at 2/09/2008 09:30:00 AM