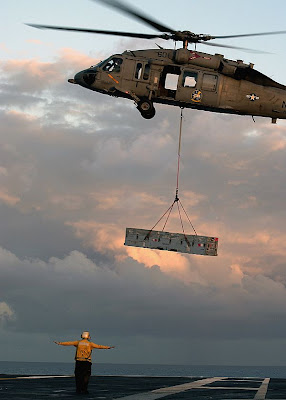 "When we were in the shipyard, we offloaded all of our ammunition because we had to renovate the ship," said TR Executive Officer, Capt. Greg Fenton. "This CONREP gives the Deck Department enough practice to perform underway replenishments (UNREPs) and CONREPs to load supplies onto the ship."

TR Sailors felt they were prepared for the CONREP before the underway period started.

"So far, this will be my second CONREP," said Aviation Ordnanceman (AW) 3rd Class Dustin Heinbaugh. "It took us months of preparation to get ready for this. We had the best training to get us prepared for the CONREP. I believe if we perform this CONREP as smoothly as possible and exactly like we were trained, we should be done ahead of schedule."

Not only is the CONREP essential to TR's mission readiness, Sailors have to keep safety in mind while loading ordnance onto the ship.

"Everyone has to be vigilant and keep an eye on our shipmates at all times," said Chief Boatswain's Mate (SW) Alston Gaines, Deck Department's 1st Division leading chief petty officer (LCPO). "When we load everything we need onto the ship, there are many dangerous factors that have to be taken into account. For example, nobody should be standing between the load and sliding pad eye. It's also important that no one turns their back on the rig because the load could break loose and fall on someone."

After loads are complete and more onloading occurs, departments bring the ammunition to their respective locations.

"We have to make certain magazines are loaded into certain types of ordnance," said Senior Chief Gunner's Mate (SW) Valerie Waters, Weapons Department's G-2 division LCPO. "Our job is to properly segregate all the ammunition to make sure every weapon is put in their place. So far, we've loaded torpedoes, bombs and small arms ammunition onto the ship."
at 2/08/2008 08:30:00 AM