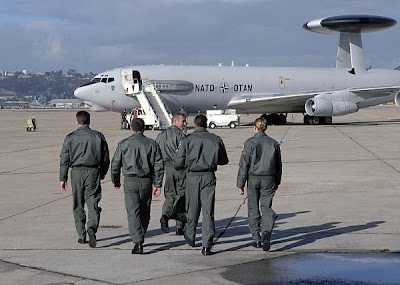 Crewmembers assigned to the NATO Airborne Early Warning & Control Force E-3A component, head toward their aircraft in preparation for a Joint Task Force exercise off the coast of Southern California. The NATO E-3A component aircraft along with over 15 different nations are participating in the joint exercise. (U.S. Navy photo by Mass Communication Specialist Seaman Brian K. Fromal)

MMP Note: For my West Coast/SoCal friends, you have a NATO AWACS a/c in the area.

A NATO Airborne Early Warning and Control System (AWACS) E-3A aircraft from the NATO AWACS Geilenkirchen Air Base in Germany is temporarily in San Diego to participate in Joint Task Force Exercise (JTFEX 03-08).

On Jan. 30, the E-3A aircraft participated in JTFEX 03-08 to defend the Abraham Lincoln Strike Group from a simulated air attack.

Lt. Paul Gibson is a weapons system operator aboard the aircraft and one of seven Navy personnel serving with NATO AWACS.

"There are a total of 29 operating positions in the E-3A," said Gibson. "Operator tasks range from weapons control to surveillance, which aid the strike group by contributing to the Link 11 and Link 16 picture."

The 153-foot-long aircraft is outfitted with a dish-shaped rotodome, similar in appearance to an E-2C Hawkeye. It is equipped with cutting-edge technology, including large aircraft infrared countermeasures that have sensors and a laser system to detect and destroy inbound missiles.

"The E-3A also uses an improved radar system that the NATO air crew has received extensive training to use," Gibson explained. "The plane just got some recent electronic upgrades, and we're using a whole new operating system."

Petra Prem, a service member from Vesprem, Hungary, with a rank equivalent to a chief petty officer is another member of the 12 participating NATO AWACS countries.

"For me personally, working for NATO is rewarding because I don't have a lot of opportunities to travel in my own country," Prem said. "Once you get a NATO assignment, the world opens up for you."

Gibson added, "Working with the U.S. Air Force as well as with service members from other countries, I've learned about the benefits of interoperability, and that means seeing how other nations conduct operations, share corporate knowledge and even learn new techniques from one another."

Among the exercise missions supported by the AWACS are maritime interdiction, close-air support and combat search-and-rescue training. The AWACS deployment to San Diego also represents the first deployment of an upgraded NATO mid-term AWACS aircraft to the U.S. The E-3A AWACS aircraft is the most modern airborne early warning and control aircraft in the world.

The E-3A crew represents the only multinational military flying unit in the world. The NATO AWACS command is a key element of the NATO Response Force and has deployed AWACS and cargo aircraft around the world in support of world leadership events and humanitarian operations, including Hurricane Katrina and Pakistan earthquake relief. The command also sent AWACS aircraft to the U.S., in response to the Sept. 11 terrorist attacks.
at 2/02/2008 09:33:00 AM