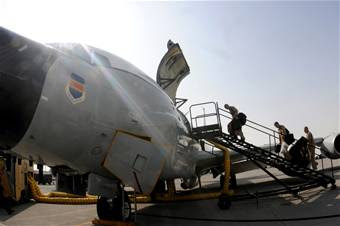 The RC-135 Rivet Joint aircraft flight crew boards to perform cross-checks within the body of the aircraft Jan. 30 in Southwest Asia. The RC-135 has participated in every armed conflict involving U.S. assets. The RC-135 is the only aircraft that boasts a record of being continuously deployed for more than 17 years. (U.S. Air Force photo/Senior Airman Domonique Simmons)

SOUTHWEST ASIA (AFPN) -- In the year 1962, The Beatles recorded their debut single, "Love Me Do," "The Beverly Hillbillies" premiered on television, a ticket to the movies cost 50 cents and the first RC-135 Rivet Joint aircraft rolled off the Boeing assembly line.

Now, nearly a half a century later, The Beatles haven't had a number-one single since the seventies, "The Beverly Hillbillies" can only be seen in reruns, and the average price of a movie ticket has risen to more than eight dollars, but the RC-135 continues its mission, having participated in every armed conflict involving U.S. assets. The RC-135 boasts a record of being continuously deployed for more than 17 years.

Based out of Southwest Asia, the RC-135 has maintained a presence in the Central Command area of responsibility since August 1990. The Airmen that have been charged with carrying out the mission of this vital intelligence, surveillance and reconnaissance asset are proud members of the 763rd Expeditionary Reconnaissance Squadron deployed from Offutt Air Force Base, Neb., Kadena Air Base, Japan, and Mildenhall Royal Air Force, England.

Cockpit crews, intelligence experts, electronic warfare officers, and in-flight maintenance technicians have rotated into and out of Southwest Asia along with the aircraft for a variety of duties over the past 17 years. While their tour lengths in the AOR may fluctuate, the mission remains the same: protecting the boots on the ground.

"(The RC-135) is an ISR platform that provides real-time targeting intelligence for the forces on the ground so that they can act on it," said Capt. Sean Cunniff, the 763rd ERS tactical coordinator. "We provide tactical support to troops in combat, close-air-support aircraft, other ISR platforms, and any other assets that need it."

The aviators aboard the aircraft do this by orbiting overhead and monitoring adversary signals. They can then relay that information to coalition forces to warn them of an imminent threat.

RC-135 aircraft commander Capt. Dave Dinan, with the 763rd ERS, refers to the mission as, "turning on the lights so that everyone can see."

A valuable feature of the RC-135 is the on-board communications suite that allows the crew to talk directly with a tactical air control party in real-time. This communications channel keeps the TACP on the ground up to speed on any threats or enemy advances and helps coordinate close-air-support.

Watching out for the safety and security of the convoys throughout the AOR is a big responsibility.

"Recently, a TACP paid our crew the highest compliment. He said, 'It's a comforting feeling knowing you guys are up there, overhead, watching our backs,'" Captain Cunniff said.

Echoing that sentiment, Lt. Col Christopher Cohoes, the commander of the 763rd ERS, says he receives e-mails and letters from ground commanders weekly thanking the 763rd for the tremendous advantage they give them over the enemy. "Our ability to integrate with the rest of the 379th (Air Expeditionary Wing) assets and all coalition forces on the ground results in a unity of effort that is awesome in its power," he said.

While deployments for crew members of the RC-135 are frequent, the experience gained is priceless, said Senior Airman Glenn Permar, a cryptologic operator aboard the aircraft.

"It's hard to execute the mission from home. Here, we are involved in the fight everyday, flying over 120 hours a month," Airman Permar said. "The feeling of job satisfaction I get from being here is very high. It comes with knowing what we are doing is important."

Deployed to the AOR for the first time, Airman Permar has volunteered to extend his tour here.

While what's "hot" and what's not may come and go, the RC-135 will continue to play a key role in Southwest Asia.

"We are heavily involved in (operations over Afghanistan), and many of the success stories you see in the air and on the ground can be linked to the work we do every day," said Colonel Cohoes. "(Operations over Afghanistan) are a key piece to winning the war on terrorism, and there is absolutely no doubt that the exceptional work we do there is putting a squeeze on the bad guys."
at 2/06/2008 09:32:00 AM