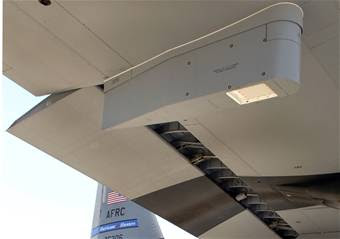 KEESLER AIR FORCE BASE, Miss. (AFPN) -- When Hurricane Hunter crews from Keesler Air Force Base track severe storms in 2008 with their WC-130J Hercules aircraft, they will do so with the latest equipment received Feb. 15 that will collect data and provide weather warnings.

Members of Air Force Reserve Command's 403rd Wing took delivery of the last of 10 stepped-frequency microwave radiometers, known as "smurfs," that are state-of-the-art instruments designed to continuously and accurately measure the winds at the ocean's surface directly below an aircraft.

The technologically advanced WC-130J began to be upgraded last year with the smurf, enhancing the lifesaving storm data collection by the only operational weather reconnaissance squadron in the world. Airmen of the 53rd Weather Reconnaissance Squadron use WC-130Js to track hurricanes, tropical depressions and severe weather.

"The SFMR will be the biggest advance I can think of to improve hurricane intensity forecasts," said Max Mayfield, the National Hurricane Center former director.

In the past, crews extrapolated wind speeds at the aircraft's altitude or from a dropsonde released from the aircraft.

The smurf directly measures the surface winds and is not confined to a single point like the dropsonde. This constant measurement of surface winds gives National Hurricane Center officials a more complete picture of the storm.

The smurf can also determine rainfall rates within a storm system. This, in addition to wind speeds at flight level, provides structural detail of the storm.

The Hurricane Hunters improve the accuracy of the National Hurricane Center's forecast by 30 percent, a number likely to rise with the use of the smurf.
at 2/23/2008 08:15:00 AM