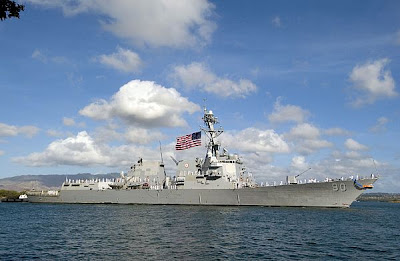 PEARL HARBOR (NNS) -- More than 350 Sailors assigned to the Pearl Harbor-based guided-missile destroyer USS Chafee (DDG 90) were joined by their friends and family as they departed Naval Station Pearl Harbor Jan. 30 for a deployment under the Navy's Fleet Response Plan (FRP).

The ship deployed as part of Nimitz Carrier Strike Group (CSG) and will operate in the Western Pacific while forward-deployed USS Kitty Hawk (CV 63) undergoes scheduled maintenance in Yokosuka, Japan.

"I'm nervous. This is my husband's first time deploying, but he's doing his job and I'll support him in whatever he does," said a spouse of a Chafee Sailor.

In Sept. 2007, the Nimitz CSG, which included Chafee, returned from a six-month deployment to the Persian Gulf and Western Pacific.

"The Chafee team has done an outstanding job in giving the ship a turnaround from the return in September to get ready for this deployment," said Cmdr. Robert Tortora, commanding officer, Chafee. "It takes a lot of hard work, and the Sailors have done a great job in getting the ship ready."

Despite the quick turnaround to get the ship back underway for deployment, the crew looks forward to be able to return to sea and operate while underway.

"I love going out to sea and doing my job - driving the ship, standing lookout watch and making sure the ship goes where it needs to go," said Boatswain's Mate 3rd Class Steven Bryant.

Chafee is 471 feet in length, 59 feet wide and has a maximum speed of 30 plus knots. The ship operates in support of carrier strike groups, surface action groups, amphibious groups, and replenishment groups and is a multi-mission (anti-air warfare, anti-submarine warfare, and anti-surface warfare) surface combatant.
at 2/02/2008 09:18:00 AM