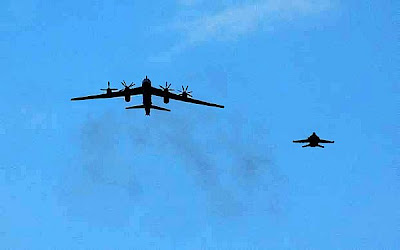 An F/A-18 Hornet from Carrier Air Wing (CVW) 11, embarked aboard the aircraft carrier USS Nimitz (CVN 68) escorts a Russian Tu-95 Bear, long rang bomber aircraft on Feb. 9, 2008 south of Japan. The bomber neared the vicinity of the carrier resulting in the fighter intercept. Nimitz was transiting through the Western Pacific on a regularly scheduled deployment when the incident occurred. (U.S. Navy Photo)

A weekend incident in which a Russian bomber “buzzed” the Nimitz battle group in the Pacific raises concerns about Russia’s intent and the message it was meant to send, the vice chairman of the Joint Chiefs of Staff told Congress today.

Marine Gen. James E. Cartwright told the Senate Budget Committee the encounter -- in which U.S. F/A-18 jets scrambled to intercept a Russian Tu-95 Bear bomber as it flew at 2,000 feet above the battle group -- ended without incident but raises big questions.

In total, four Russian Tu-95 bombers were involved, a Navy spokesman said. Two remained about 500 miles east of the U.S. ships, and another orbited about 50 miles away as one Tu-95 did two low passes over the Nimitz carrier group, he said.

“Now what we are concerned about is, ‘What are the indications of this return to a Cold War mindset?’” Cartwright told the committee in response to a senator’s question. “What are the implications of that activity, and how do we best address that?”

Cartwright conceded that the incident occurred in international airspace and “within the normal air structure,” but he said it’s left defense officials questioning the rationale behind it. “What message was intended by this overflight?” he said.

U.S. jets scrambled after detecting the Russian bombers more than 500 miles out and escorted them as they turned and headed toward home, Cartwright said. He said the actions were normal response to such activities in international waters. “These are the standard practices from our standpoint of intercept, escort, follow them through, and then follow them until they are out of range of the battle group’s normal operations,” he said.

The escort provided “both for safety of flight in the area and for the potential protection that would be afforded by having an escort along,” he said.

Cartwright said encounters like the one that occurred over the weekend have happened before, but not recently. A Russian Bear overflew USS Kitty Hawk in July 2004 as it operated in the Sea of Japan, U.S. Pacific Fleet officials said.

“We treat that as something that is unusual from the standpoint that there has been a significant lapse in time since that last occurred,” Cartwright said. “But not significant is that the practice was done safely, professionally and they were escorted out of the area.”

The Nimitz Carrier Strike Group entered the U.S. 7th Fleet's area of responsibility just one day before the incident to fill in while USS Kitty Hawk undergoes scheduled maintenance in Japan. The 7th Fleet, the largest of the forward-deployed U.S. fleets, includes about 50 ships, 120 aircraft and 20,000 sailors and Marines and is operating in the Western Pacific and Indian oceans.

USS Nimitz arrived in Sasebo, Japan, Feb. 11 for a scheduled port visit. Its crew is participating in friendship-building and goodwill-generating activities, as well as cultural exchanges, Navy officials said.
at 2/13/2008 09:27:00 AM