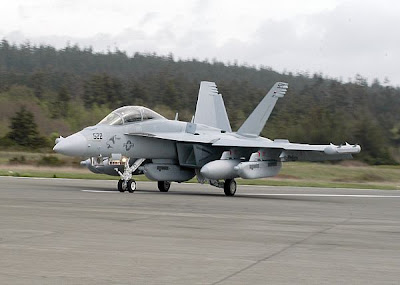 Naval Air Station Whidbey Island (NASWI) held a groundbreaking at Hangar 5, Feb. 15, to kick off its recapitalization in preparation for the arrival of the EA-18G Growler.

The first Growler is anticipated to arrive June 3 and, along with the Growler Support Center groundbreaking, Oct. 31, signs of progression toward the new NASWI will be moving forward over the next three-and-a-half years, according to Capt. Thomas Tack, commodore of Electronic Attack Wing Pacific.

"It's a new community in a sense that we are going from the aircraft we've known and pretty much loved for the past 36 years to a brand new airplane which is going to give us a whole host of new capabilities," said Tack. "The base is going to change over the coming decade. The electronic attack squadron community is also going to change drastically with new aircraft, new tactical systems, which is far more survivable, far more maintainable and a lot better warfighting machine."

The renovation will be a three-phase project lasting approximately three years. The construction began Jan. 22 and the third phase will be nearing completion in June 2010. The hangar is being designed to accommodate five EA-18G squadrons, an electronic attack weapons school and the wing maintenance department.

According to Oak Harbor Mayor Jim Slowik, not only is the NASWI looking forward to the transition, but the entire community as well.

"The community is so excited about it because it's all they talk about" said Slowik. "I know people on my staff are working with the Navy to make preparations to see the Growler when it arrives. We're hoping to have a proper celebration for it in June. It's very exciting times."

"It's coming and now we're starting to see the preparatory steps to deliver the first jet in June and the rapid transition of this community from an all EA-6B (Prowler) fleet to an all EA-18G fleet," said Tack. "This Growler Support Center and this new Hangar 5 complex are the first real tangible steps where you can say, 'there's a change going on at Whidbey Island.' For the guys that work and live on this base, this is the beginning. It's going to be exciting. It rocks."
at 2/22/2008 09:41:00 AM