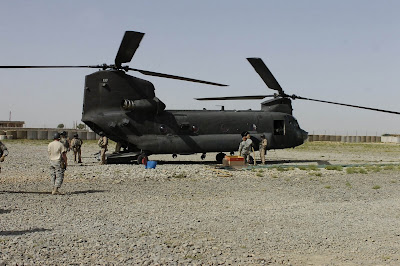 Flight crews and personnel on board a CH-47 Chinook dismount the helicopter during refueling to maintain their safety each time the aircraft lands to fuel. (US Army photo by Spc. Aubree Rundle)

These vital missions allow daily operations to take place as smoothly as possible and therefore play a major support role in Afghanistan as part of Operation Enduring Freedom VIII.

Chinook helicopters, also referred to as the "working horse" of rotary wing helicopters in theater, work around the clock as an aviation benefit to ground elements throughout Afghanistan.

Manned by five-person flight crews, the maintenance requirements and flight procedures for a Chinook are anything but simple.

"We conduct pre-flight inspections and check all systems several hours in advance before the execution of any mission," said Army Staff Sgt. James Fleming, a flight engineer with 1-158th Avn. Reg.

Flying in and out of valleys and around mountain ridges, the Chinook helicopter is the fastest working rotary wing helicopter in the fleet. Chinooks routinely carry several thousand pounds of cargo in one trip delivering pallets of military supplies, mail, food and bottled water to the various outposts and fire bases throughout Afghanistan.

According to Staff Sgt. Fleming, these "work horse" helicopters do get a break from the strain put on them each day as they are put through down phases after so many flight-hours pass. This helps keep the aircraft up to speed and always prepared for the high altitudes and weathering it receives while in theater, Staff Sgt. Fleming continued.

The "Yetis" have been deployed since September 2006, supporting the 10th Combat Aviation Brigade, 10th Mountain Division, during Operation Enduring Freedom VII and are soon to bid "farewell" to the 82nd CAB returning to their home posts.

"I volunteered to deploy for this rotation because as a door gunner and crew member for a Chinook our tasks are to maintain mission readiness for all the Soldiers on ground patrol; this is an important mission for me," said Sgt. Chase Cervanka, door gunner with 1-158th Av. Reg.
at 8/14/2007 07:28:00 AM