Winter flights to Antarctica wrap up 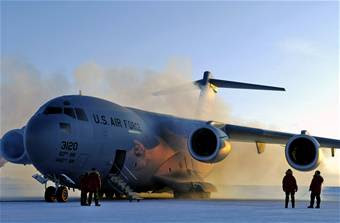 Members of the 304th Expeditionary Airlift Squadron flew a total of 355 passengers and 119,953 pounds of cargo to and from McMurdo Station, Antarctica, during the winter fly-in, or WinFly, season.

McMurdo Station serves as the logistical hub for much of the U.S. Antarctic Program. With the influx of cargo and people delivered by a C-17 Globemaster III, McMurdo Station staff will begin preparations for the main summer research season. They will prepare buildings, offices, equipment and an ice runway on McMurdo Sound for the arrival of the main body population of scientists and support staff.

Winter fly-in is the coldest time of the year. Temperatures of -40 degrees are not uncommon and wind chills can cause the temperatures to be -130 degrees. Despite these extremes and only one delay due to bad weather, the C-17 crews dealt with the adversity.

"The mission was outstanding. It couldn't have gone any better if we planed it," said Capt. Cory Simmons, a pilot with the 304th EAS.

As a reliable platform for Operation Deep Freeze, C-17s can carry numerous passengers, cargo and fuel to Antarctica and back with reduced risks. With minor changes to the aircraft, each mission is carefully planned to meet the U.S. Antarctic Program's needs for their mission.

"The C-17 is designed to fly all around the world, the same way all the time. Everything is onboard ready to go to fight any fight," said Senior Master Sgt. Jim Masura, the 304th Expeditionary Airlift Squadron superintendent. "It's not big changes that we did for WinFly; it just gives the customer and us more flexibility with the weight and fuel, and gives us a little safety factor."

With a two-hour time frame, aircrews and maintainers were busy at work. The loadmasters unloaded and loaded cargo while the maintainers took on fuel and placed heaters at key points on the aircraft to ensure the engines and landing gears would not freeze up. The pilots kept busy cycling through the flight controls to keep the hydraulic fluids warm to ensure the integrity of the flight functions on the C-17.

"Just because it is WinFly and so cold, you worry about shutting down the engines," Captain Simmons said. "When we land, everyone is doing something. The crew is large, not because of training, but because we have eyes on everything to make sure there's no problems and everything is running smoothly."

WinFly missions to Antarctica can be a daunting task because of weather, frigid temperatures, cargo loads and people. Efficiency, safety and meeting the customers needs ended the successful week-long flurry of activity for the WinFly Airmen.

Operation Deep Freeze is divided into three seasons: WinFly, main body and winter. It involves active duty and Reserve C-17 support from McChord AFB, LC-130 Hercules aircraft from the New York Air National Guard and other aircraft necessary to support the mission, as well as Coast Guard icebreakers and the Navy Cargo Handling Battalion One to provide critical port services at McMurdo Station.
at 8/28/2007 06:07:00 AM