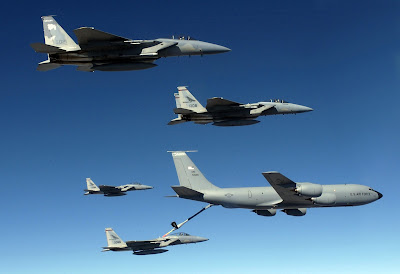 Courtesy of Mike Riffle and the Milcom gang.

KLAMATH FALLS, Ore. – Kingsley Field will host its 13th air-to-air combat exercise and open house on August 11, inviting the public to enjoy a multitude of fighter jets, flying demonstration and static displays from 9 a.m. to 4 p.m. and admission is free.

"This exercise provides an excellent opportunity for our service members from different units to come together for valuable training in an environment that may be exactly what they'll face in real life," said 173rd Fighter Wing Commander Col. Thomas R. Schiess. "Sentry Eagle allows units to set the objectives of the exercise to line up with their unit training objectives."

"Sentry Eagle is the premier venue for Kingsley Field personnel to say "thank you" to the Klamath basin for their continued support."

State, community and civic leaders as well as the public are invited to Kingsley Field to participate in this public appreciation open house on August 11, he said.

Sentry Eagle is an opportunity for the public to visit the base for an up-close look at high-tech fighter aircraft, complex air traffic control operations and other state of the art military aircraft.

Aircraft participating this year include F-15s, F-16s, F-18s, F-22s, F-117s, B-1s, KC-135s, C-21s among others, along with an F-15 demonstration and static displays from the Army and Air Force. Additionally, more than 45 non-profit organization vendors will be selling merchandise and food during the open house.

Parking will be available off-base, west of Spring Lake Road, across from Kingsley Field's south gate. Handicapped parking will be on base and will require a state handicap placard.

And for our friends in the Pacific Northwest: