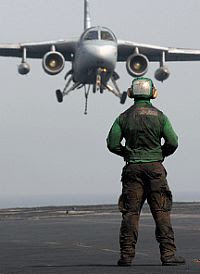 USS JOHN C. STENNIS, At Sea (NNS) -- The “Top Cats” of Sea Control Squadron (VS) 31 are nearing the end of the S-3 Viking community’s final deployment to the Western Pacific aboard USS John C. Stennis (CVN 74).

While VS-31 is conducting their sundown cruise embarked on Stennis as part of Carrier Air Wing (CVW) 9, the "Top Cats" continue to support ground forces in Afghanistan and Iraq conducting maritime security operations. By providing surface surveillance, reconnaissance and in-flight refueling to other aircraft, the "Top Cats" are invaluable to the U.S. 5th Fleet area of operations (AOO).

Prior to deploying aboard Stennis, VS-31 flew cross-country to embark the West Coast-based carrier for the squadron’s farewell deployment, and last S-3 Viking deployment to the Pacific.

“It is a great opportunity to be part of the final western Pacific deployment,” said Lt. John Kovalsky. “The entire squadron is proactive and focused on keeping our jets flying safe and making this deployment the best one to date.”

Stennis and CVW-9 entered the 5th Fleet AOO on Feb. 19 and have been conducting missions in support of coalition forces operating on the ground in Operations Iraqi Freedom and Enduring Freedom.

“Of course we miss our children, our wives, and the pleasures of home,” said Lt. Cmdr. Christopher Levitt. “However, to be flying over Iraq one day, providing late night tanker support the next, we are certainly keeping ourselves busy."

From the "Top Cat’s" home away from home, ready room 7, Levitt spoke about the positive morale of the squadron and its flexibility and professionalism over the past five months.

“Couple that with the outstanding advancement and reenlistment rate of the Sailors within our squadron, I’d say that makes for a cruise with accolades that cannot be challenged,” he said.

Several "Top Cats" are also chasing many career milestones this deployment. VS-31’s Commanding Officer, Cmdr. Mohammad Khan is 40 arrested landings away from reaching 1,000 and Lt. Robert Chandler is close to 1,000 hours in the S-3 Viking, a rare feat among junior officers.