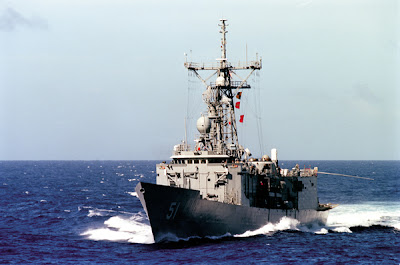 Gary, the only frigate in the forward-deployed U.S. 7th Fleet, will return to San Diego after eight years in Yokosuka.

“This is a celebration,” said Commander, U.S. Naval Forces Japan Rear Adm. James D. Kelly, the keynote speaker for the ceremony. “Yes, we are a little sad to see the USS Gary go back east, but she’s not going away. She’s still in the service of the U.S. Navy.”

Kelly recounted the many missions, exercises and port visits that Gary completed during the last eight years, emphasizing the ship’s engagement in a number of groundbreaking international relations visits to foreign ports.

“We are sure going to miss the Gary’s engagement capability, which really is significant, not to mention her warfighting prowess,” said Kelly. “But this is all about them; it isn’t about U.S. Naval Forces Japan, it’s about the crew of Gary.”

Commander, Fleet Activities Yokosuka, Capt. Daniel Weed, was also on hand for the ceremony and spoke of the correlation between Gary’s namesake and the ship’s crew.

The late Cmdr. Donald Arthur Gary was awarded the Medal of Honor in 1946 for his heroic actions while serving aboard USS Franklin (CV 13) as a lieutenant. During a Japanese attack on the ship, Gary was credited with saving the lives of hundreds of the crew, leading them out of the badly damaged compartments below decks.

The crew of the Gary seemed to appreciate the ceremony, both for the recognition for their service and for the opportunity to recognize those who have supported them.

“It gives us a chance to thank everybody that’s helped us out,” said Sonar Technician Surface 3rd Class Michael Keys.

As Gary prepares to depart its berthing in Yokosuka for the last time, Weed summarized the emotions surrounding the ship’s departure.

“Today we say farewell to one of Yokosuka’s gray ghosts,” said Weed. “Despite our sadness, however, we are bolstered with pride as you man the watch for Tokyo Wan sea-and-anchor detail one final time.”
at 8/14/2007 07:08:00 AM