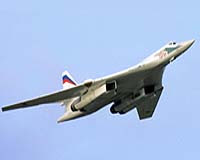 Thanks to Torbjorn in Sweden on the UDXF group for this heads up. Related article on this blog at http://mt-milcom.blogspot.com/2007/08/russian-bombers-resume-cold-war-sorties.html
Source: RIA Novosti Press Service

The Russian strategic aviation will fly over the North Pole and conduct test launches of cruise missiles during a series of exercises in August, the Defense Ministry said on its website Tuesday.
Units of the 37th Air Army of the Strategic Command will conduct a total of six tactical exercises in August as part of an annual training program, the ministry said in a statement.

"During the exercises, strategic bombers will test launch cruise missiles, conduct simulated bombing raids, and fly over the North Pole, the Pacific and Atlantic oceans," the statement said.

Lieutenant General Igor Khvorov, the newly appointed chief of the Air Force Main Staff, said in March that Russia's strategic aviation had sufficient potential to suppress elements of a U.S. missile defense shield should it be deployed in Central Europe.
at 8/16/2007 12:15:00 PM