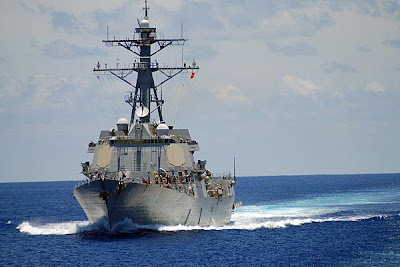 “Preble immediately got involved, providing stability and maritime security,” said Commander, Carrier Strike Group 3, Rear Adm. Kevin Quinn. “They did approach and assist visits to some of the regional fishermen and ships of the area. They worked with our coalition partners and performed exercises to help build the capabilities of those navies to work within their own waters. They did some significant work in the North Persian Gulf in defense of the Iraqi oil platforms, which provide more than 90 percent of the revenue for the government of Iraq.”

“If you measure success in terms of meeting operational tasking and operating safely, then we’ve been very successful,” said Feinberg. “As a destroyer, we have an anti-submarine and anti-surface mission, but we also have the SH-60B Seahawks embarked, which give us extended detection capability. They are not only a ship asset, but a strike group asset.”

While in the 5th Fleet area of operations, Preble was tasked to conduct maritime operations in support of Combined Task Force 158, 152 and 150.

“Our primary mission was to develop a rapport with mariners in the area,” said Ensign Tom Hennessey, visit, board, search and seizure (VBSS) officer in charge. “We wanted to build relationships with as many locals as possible.”

Interaction patrols are an element of maritime operations conducted in Iraqi territorial waters so that commercial shipping and fishing can occur safely in the region.

Maritime operations help set the conditions for security and stability in the maritime environment, as well as complement the counter-terrorism and security efforts of regional nations. Coalition forces conduct maritime operations to ensure security and safety in international waters so that all commercial shipping can operate freely while transiting the region.

To achieve this goal, VBSS teams departed Preble almost daily, aiming to generate support and awareness amongst vessels sailing in the region of the coalition’s efforts to ensure a safe and secure maritime environment.

“The more we interacted with the locals, the more comfortable they became,” said Sonar Technician (Surface) 3rd Class Jeff Shaver, a VBSS team member. “It was great to see people pull alongside our boat talking and smiling. I think they know we were there to help.”

After successfully completing operations with 5th Fleet on July 11, Preble, along with the rest of JCSSG sailed to the U.S 7th Fleet area of responsibility where Sailors and Marines enjoyed port visits in Singapore and Hong Kong.

Following the strike group’s visit to Hong Kong, JCSSG participated in exercise Valiant Shield 2007 off the coast of Guam Aug. 7-14. Valiant Shield, which was the largest joint exercise in recent history, tested the military’s ability to rapidly bring together joint forces in response to any regional contingency and demonstrated the United States’ commitment in the Pacific.

“We have met or exceeded every goal that has been set for us and kept a close and accurate surface and sub-surface picture for the John C. Stennis Carrier Strike Group,” said Herr-Garrett.

“Our ship executed very well, our crew’s experience was amazing and they worked well together,” said Feinberg.
Following Valiant Shield, Preble transited the Pacific Ocean and arrived at their homeport of San Diego today.
at 8/30/2007 06:59:00 AM