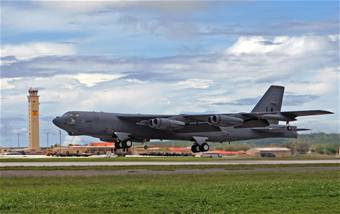 A B-52 Stratofortress takes off from Andersen Air Force Base, Guam, to participate in an exercise scenario Aug. 22. The aircraft, aircrew and maintainers are deployed from Barksdale AFB, La., as part of the continuous bomber presence in the Pacific region. During their deployment to Guam, the bomber squadron's participation in exercises will emphasize the U.S. bomber presence, demonstrating U.S. commitment to the Pacific region. (U.S. Air Force photo/Senior Master Sgt. Mahmoud Rasouliyan)

B-52 Stratofortresses and aircrews demonstrated the Air Force's global reach and global power by participating in the latest Koa Lightning exercise Aug. 21 through 23 from Andersen Air Force Base.

Airmen of the 20th Expeditionary Bomb Squadron, deployed from Barksdale AFB, La., flew 18 hours non-stop from Guam to Hawaii and back in the exercise to participate in scenarios designed to sharpen the combat skills and test the endurance of its aircrews.

The flights, similar to a combat sortie, included a scenario where aircrews simulated engaging ground targets in Hawaii. The aircrews practiced defensive tactics and measures while simulating dropping their bombs on target.

"These training missions are valuable to our aircrews as it simulates likely conditions they could encounter in combat," said Lt. Col. Tom Hesterman, the 20th EBS commander. "Crews are better prepared when we train like we fight."

"Tankers are key enablers that demonstrate our ability to operate as a cohesive team and extend the lethal range of our bombers as well as enhancing our flexibility," Colonel Hesterman said.

Mid-air refueling allows the receiving aircraft to remain airborne longer and extend its range and those of its weapons systems demonstrating global reach and global power.

As part of the continuous bomber presence in the Pacific region, the U.S. routinely deploys forces to the Western Pacific to maintain a credible deterrent posture and presence for the region and demonstrate a continued U.S. commitment to fulfilling security responsibilities throughout the Western Pacific.