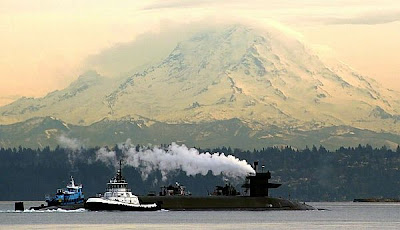 The Ohio-class nuclear powered ballistic missile submarine USS Alabama (SSBN-731) is being moved "dead-stick" in the sound by a flotilla of tug boats with Mount Rainer in background. (U.S. Navy photographed by Mr. Anthony Madina)

The Alabama was officially dry-docked Jan. 18, 2006. Overall maintenance is scheduled for completion in the spring of 2008, which means the Alabama should be ready to start sea trials, finish the recertification process and return to the Navy as an operational unit.

“This is a huge step and a key event,” said Lt. Gary Dunn, Alabama engineering refueling overhaul coordinator (EROC). “We are undocking the ship in progression to complete the avail[ability]. Ahead of us are tests for the reactor plant, habitability and steaming. All these are key events we have to meet before we do fast cruise and sea trails.”

During Alabama’s dry-dock period, it endured 11 hull cuts which had to be welded back together and made water tight.

“We were in very good material condition for this undocking and we have our turtle-back back on,” said Dunn. “A lot of the work has already been done, so we are ahead of schedule. The undocking is going very well.”

Workers had to make sure all the piping systems which were taken apart had their water-tight integrity back before they flooded the dock.

“This is just one of the milestones along the way for the Alabama,” said Cmdr. Todd Massidda, Alabama commanding officer. “It’s a big one, because we got a lot of the work below the water line done. We are transitioning from the shipyard ... getting the ship outfitted and ready to go out to sea again. We have a lot more work to go.”

The crew of Alabama has to put the ship through its paces by testing all the new equipment and then the crew has to get recertified to take the ship back out to sea.

“An important factor which has gotten us to this point are approximately 650 to 700 shipyard workers teaming with about 200 ships force guys,” said Massidda. "That is a testament to the entire project team.”

Sailors of the Alabama are happy about the success of the refueling overhaul.